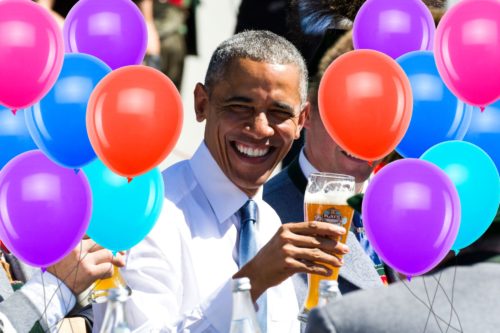 Another August 4th has come and gone, and Obama social media fans have wished him a Happy Birthday[2] as is their custom. But unlike the last 8 years, this time he isn’t the President. He is the former President. As one would expect, former First Lady Michelle Obama wished her husband a Happy Birthday via Twitter.

Another year older, but the same phenomenal guy I married nearly 25 years ago. Happy birthday, @BarackObama[3] — we love you so much! pic.twitter.com/3WrcGiKgz1[4]

And former Vice President Joe Biden also got in on it, tweeting his birthday wishes.

Your service has been a great gift to the country, and your friendship and brotherhood are a great gift to me. Happy birthday, @BarackObama[3]. pic.twitter.com/1uSEkU01k9[6]

But isn’t the best part of all that, the fact that these three are all FORMER, not current? Isn’t it a sign of hope for our nation that these divisive folks are out of office and out of the White House? But I digress.

The former President also received another birthday greeting. This time it was from the GOP. And included in with the ‘heartfelt’ birthday wishes, were some pointed statistics just released about jobs numbers…jobs numbers that are looking good thanks to our CURRENT President, Donald J. Trump. These great numbers are in stark contrast to the poor numbers posted by the Obama administration. The GOP took the opportunity to call out Obama and his policies on the occasion of his birthday.

Since Trump has been in office, he has brought us 2.6% growth in the second quarter, new jobs and record closing numbers on the DOW. This past week saw the DOW close at over 22,000 for the first time in history. More and more companies are investing in America, bringing more and more jobs back to Americans.

August 4th may be Obama’s birthday, but November 8th was the day the American people received the gift of a President who loves this nation and wants to do what it takes to make it great again. So, happy birthday Obama, we are glad you are celebrating somewhere other than in the White House.