HuffPo: “Is There A Human Being On Earth That Wouldn’t Want Barack Obama As A Son?”

[1]
I can think of a few reasons, but none of them the fawning Obamatons working at the Huffington Post would understand:[2]

Jerry Springer sat down with HuffPost Live on Tuesday, questioning why the public holds any hatred toward President Barack Obama.

Springer, who is hosting a new Discovery Channel series called “TABLOID,” argued that “we have built such disrespect for the president” – a thought that is unacceptable in his mind.

“Why would you ever hate Barack Obama?,” Springer asked. “You may not like his policies. You may say ‘respectfully sir, I disagree. I’m going to vote this way or I want that.’: But is there a human being on the planet Earth that wouldn’t want Barack Obama as a son? I mean look at what this young man has achieved, and what he’s done on his own, and how he’s become this great leader.”

I’d also like to point out that this is Jerry Springer. 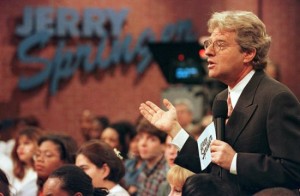 [3]
I mean, that’s not exactly an endorsement people are climbing over each other to get.