If Obama Has Lost Christopher Buckley And Obamagirl…

Remember when people who attacked Barack Obama were regularly accused of racism by liberals? Well, one of the most remarkable consequences of Scott Brown’s victory in Massachusetts is that the floodgates of criticism have now opened on the Left. It seems that liberals have discovered that their messiah has feet of clay.

Now, there have been plenty of liberal bloggers and pundits who’ve beat up on Obama, but there are a couple of names from this week that have really stood out. That’s not because they’ve been particularly vicious, but because they stuck their necks out so far for Obama in 2008.

First off, there’s Obamagirl — Amber Lee Ettinger — who, I have to admit, is one of the single best looking women I have ever seen. 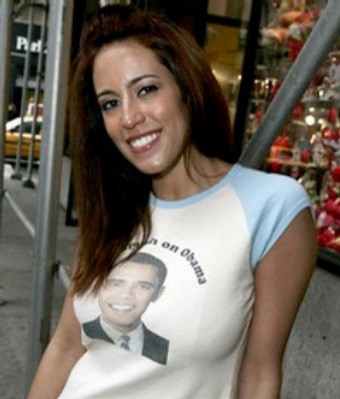 She made a name for herself initially by appearing in this “Crush on Obama” video, which has racked up more than 16 million impressions on YouTube:

Since then, Ettinger has appeared in front of tens of millions more people in videos and has done a zillion magazine shoots and TV appearances — and in almost all of them, she’s associated with the name “Obamagirl.” One problem: “Obamagirl” now seems kind of lukewarm on Obama[1]:

Amber Lee Ettinger — the buxom sensation who lip-synched about her love for then-candidate Barack Obama — said she wishes he spent his first year in office more focused on fixing the abysmal economy.

“I think he’s doing an OK job,” said Ettinger, whose original “Crush on Obama” video, first shown in 2007, has had more than 16.5 million views on YouTube.

“I know he’s getting a lot of flak for things that he’s not doing,” she told The Post. “In my opinion, I feel like he should be focusing a lot more on jobs and the economy.”

Ettinger, 28, said that even though she doesn’t have health care — “I can’t afford it” — she still thinks Obama should have waited to tackle the thorny legislation that has been blamed for the devastating Democratic loss of Ted Kennedy’s Senate seat.

“It’s definitely a distraction because of the economy being as bad as it is,” said the Jersey City resident.

“He did create some jobs, but most of them were government jobs and that doesn’t really help the middle class. But it helps a bit,” said Ettinger.
Her grade for Obama: B- minus.

Wow, what a ringing endorsement: “I think he’s doing an OK job.”

Then there’s Christopher Buckley, a mediocrity who spent a lifetime living in the shadow of his more accomplished father, William F. Buckley. Despite the fact that he was a non-entity among conservatives, inexplicably, Christopher Buckley was still working at National Review when he made a big show of leaving the publication, trashed Sarah Palin, and got behind Barack Obama. Despite the fact that Buckley had zero sway in the conservative movement, it was treated as a huge story because Buckley was once again trading off his famous father’s name.

Now, you may ask–and I wouldn’t blame you for asking–how I came up with that number. You might be saying to yourself, “Wait a minute. I’ve got no job, no health insurance. My house isn’t worth half the amount of my mortgage, and I just got called up by the National Guard to do a fifth tour in Afghanistan. How the heck did he come up with 9.8?”

So it’s a good and valid question. And the answer is that 9.8 is pretty good, considering the mess my predecessor and the Republicans left me. Fair enough? I think so.

…A year ago, I inspired the nation to have the audacity to hope that I would change the political culture in Washington. Now, a year later, it turns out I’m another hack politician–from Chicago, where, believe you me, we know a thing or two about hack politics.

I was going to set a new standard. Now I’m just a complicit bystander as Harry bribes, among others, a senator from Nebraska who wants his state to get a free pass on Medicare–in return for his vote on a health-care reform bill that would make the Founders weep, or throw up. Or both.

…And now, let me say a word or two about a subject that I have not had time to address much this past year, what with arranging summits between the Cambridge, Massachusetts, police, and aggrieved Harvard professors, to say nothing of flying to and from Scandinavia to pick up gold medals–namely, the economy.

Frankly, the economy is not what it should be, which is why the state of the union is a 9.8 instead of a perfect 10.

I called in the smart folks in my administration, many of them educated at Harvard, and I put it to them directly. I said, “Is this my fault?” And to a person they said, “No, sir! No way!”

When Obama was elected, comedians and late night talk show hosts said he was so perfect that there was just nothing to make a joke about. Now even his hack supporters like Christopher Buckley are managing to churn funny material at his expense.

At this point, the bloom is definitely off the rose, the thrill is gone, and the sow’s ear doesn’t look anything like a silk purse. So now, we’re going to get to see whether Obama can adapt to an environment where he’s not being treated as a combination of Martin Luther King, FDR, and Jesus. It should be quite a show.