You could make a case that Barack Obama deserves to be impeached for willfully going above and beyond his power as President to break the law again and again, but Republicans in Congress are unlikely to make any sort of move unless they come to the conclusion it will benefit them politically. However, that’s not stopping Overpasses for Obama’s Impeachment which is spreading the message all across Florida[1]. 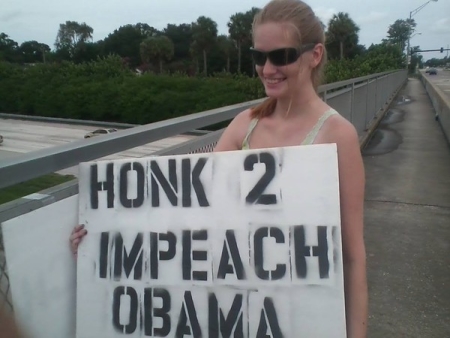 Overpasses for Obama’s Impeachment, with Facebook pages for chapters in all 50 states and Washington, D.C., gained national attention after a rally in Southern California snagged traffic in early June.

Will Obama be impeached? Barring new information coming out that more directly implicates him in the myriad of scandals his Administration is involved in, it seems unlikely. But, the more Americans who start to question whether he deserves to be impeached, the better. So kudos to Overpasses for Obama’s Impeachment for doing good work.