It’s probably not a good sign for Obama that so many people are showing up for an impeachment rally that it’s causing a MASSIVE traffic jam[1]. 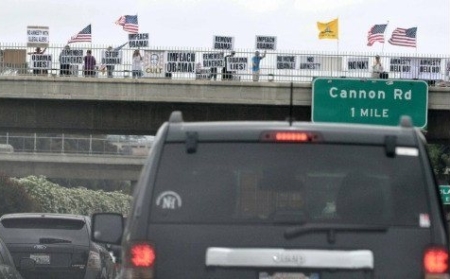 A Southern California “Impeach Obama” demonstration coordinated by the local TEA Party caused traffic to back up for miles over the weekend.

Participants flew American flags and the TEA (Taxed Enough Already) Party-adopted Gadsen flag as they stood on the overpass waving to motorists on Interstate 5. Others held placards which read “Remember Benghazi,” “Obama Lies” and “Amnesty Hell No!” according to the Carlsbad Patch.

The group advertised the event on Meetup.com and organizers estimated 25,000 to 30,000 vehicles would pass by the demonstration. Traffic was slowed for nearly 10 miles, but reportedly resumed speed on the other side of the overpass.

You do have to give Obama credit for one thing: He is good at bringing Americans together. Sure, he’s bringing them together to call for Eric Holder’s resignation and to go to anti-Obama impeachment rallies, but it’s good to see even a small bit of unity after these years of divisiveness that he’s caused.