Is Obama The Antichrist? 1 in 4 Americans Think He May Be.

“The Lord of the Flies is expanding his Reich;
All treasures, all blessings are swelling his might . . .
Down, down with the handful who doubt him!

Cheer louder, you dupes of the ambush of hell;
What’s left of life-essence, you squander its spells
And only on doomsday feel paupered.

You’ll hang out your tongues, but the trough has been drained;
You’ll panic like cattle whose farm is ablaze . . .
And dreadful the blast of the trumpet..” — The Anti-Christ, by Stefan George 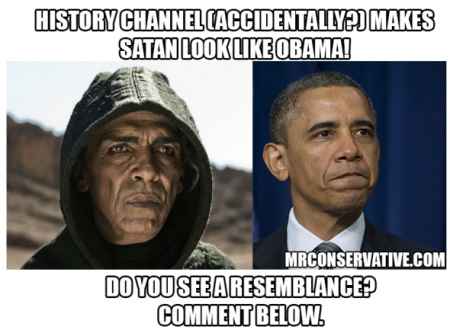 Could Barack Obama actually be the anti-Christ?

After all, as Pastor Greg Laurie has noted, the anti-Christ will appear extraordinarily gifted.

“(The Anti-Christ) will do what no other man has been able to do. There will be global peace. He will solve the Middle East peace puzzle. He will rid the world of terrorism… He will be hailed as the greatest peace-maker… But behind that will be a satanic superman… the most evil man who has ever walked on the earth.”

Barack Obama, on the other hand, thinks there are 57 states, is spending the country into bankruptcy and hasn’t done anything right in his entire presidency besides being lucky enough to be in office when Seal Team 6 killed Bin Laden.

So, Anti-Christ? No. Worst President in American history? Oh, yes.