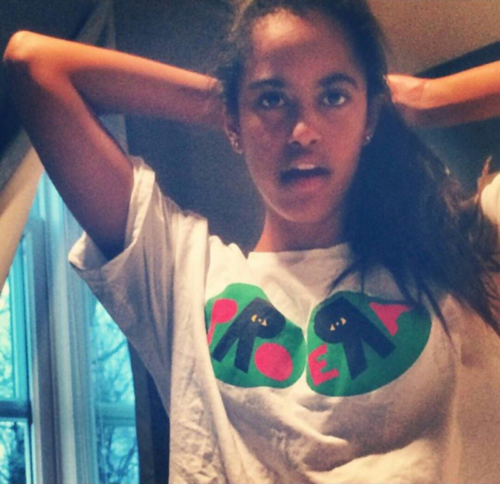 A recent video published widely in the media shows Malia Obama in what appears to be a bathroom, blowing either smoke rings or vape rings. The unwanted media attention for the former First Daughter has some folks crying foul. Among those who are chastising the news media are current First Daughter Ivanka Trump and another former First Daughter, Chelsea Clinton. They both took to social media to make their displeasure known with the coverage of Malia’s smoke blowing. See their tweets below.

Malia Obama should be allowed the same privacy as her school aged peers. She is a young adult and private citizen, and should be OFF limits.

Malia Obama’s private life, as a young woman, a college student, a private citizen, should not be your clickbait. Be better.

Both women are right about one thing and wrong about another. Malia is indeed an adult, a college student who has her own life. She is a private citizen. She is no longer living in the White House. But Ivanka and Chelsea, of all people, should know that no child of a President is ever really able to live privately. Everything they do is fodder for the press. Malia’s life is NOT off limits and neither is Ivanka’s or Chelsea’s. And because that is true, they need to be discerning about what they do, where, with whom and when, and whether any videos or photos are being taken. Malia has no greater expectation of privacy than any other citizen has. In fact, being a public figure, she should have less expectation of privacy.

Malia Obama will be observed for the rest of her life. That’s what happens when your dad was the President. Her escapades are not only not off limits, they are of great interest to our insatiable media. And no amount of silly misplaced media shaming by Ivanka or Chelsea is going to change that.

Indeed, Malia is a private citizen. And like the rest of us, if she’s recorded performing an action with which many Americans strongly disagree, like smoking, she is going to hear about it and see the video hit the news sites as well. So, unsolicited advice to Malia and anyone else who lives in the public eye, be careful what you do. Someone is always ready to snap a picture of it.

One can only wonder if the same attention would be paid to “privacy” concerns if this was a video of the Bush twins engaging in some offbeat behavior. We will likely never know, but the suspicion is that we wouldn’t hear a peep from Chelsea and probably not Ivanka. And we can only imagine that Malia herself would have nothing to say if videos of the Bush daughters started circulating. So let’s all just take a breath and understand that being famous means public attention, whether it’s wanted or unwanted. No one ever lives a truly private life. Not in today’s media soaked world. See video below, caution, profanity can be read in the video.