If you’re sick of the number of fake images circulating the Internet, then you’re on the right page. I have just about had it with people who are dedicated to spreading misinformation for their own amusement, or to push their agenda.

The most recent image has to do with former-President Barack Obama and Hurricane Harvey’s devastating impact on Texas. 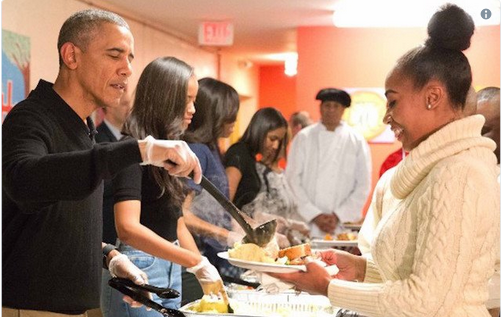 A picture that went viral purports to show Obama and his family serving the victims of Hurricane Harvey in Texas. It was originally posted with the caption: “something you’ll never see trump do: Obama is in Texas serving meals!”

Well, as good as it would be to see the former President helping those who are enduring one of the worst times of their life, it turns out it wasn’t exactly authentic.

Sure, the event actually took place, but it was of the Obama family serving Thanksgiving dinner to homeless people in 2015.

The person who tweeted the photo later removed it and apologized for the error.

If you see something that is too good to be true, for the love of all that is good take some time to investigate. If you see a photo you think is falsely attributed, you can go here[3]. Upload the photo and search to make sure you aren’t spreading fake news.

The Internet is the home of all of the information in the world, let’s not taint it with falsehoods and fake images because we want something to make us feel good about ourselves. Plenty of people are doing wonderful deeds in Texas, so let’s shine the light on them. Sure, they may not be “famous,” but don’t they deserve to be recognized for their selflessness and charity?

If you or anyone you know are helping the people of Texas, let us know your story below!