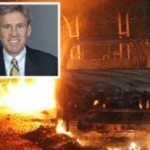 [1]The killing of Chris Stevens and three staffers in Benghazi, Libya was tragic.:  Heartfelt condolences to their families and friends areperfectly in order.:  However, compared to coverage by international news sources, the way coverage is being handled by the American news media is revealing.

Notice how a film considered incendiary by Islamists is featured within the headline.

The first paragraph of Gooya’s story speaks specifically about how the attackers, referred to as protesters, were motivated by an anti-Islamist film made by American pastor Terry Jones.

Following mention of remarks made by Libya’s Deputy Prime Minister Mustafa Abvshaqvr and U.S. Secretary of State Hillary Clinton, the article launches into an aggressive verbal attack on Jones’ film, assailing it as an assault on the Koran and the Prophet of Muhammad. : Objections are raised to the film’s depiction of Muhammad as a child molester.:  Ongoing objections concern themselves with Jewish funding of the film.

BBC Persia headlines their report with:

While the BBC headline manages to stay on point by reporting the killing of the American diplomats, the story follows the pattern of Gooya by blaming the attack on the Jones movie.:  However, BBC largely stays focused on reporting the news event rather than assigning blame for its instigation.:  It defers further comment about the movie until the end of the article, choosing rather to relay detailed statements of condemnation made by Barrack Obama, Hillary Clinton and the Libyan government.

When the BBC does mention the movie, it does so in the context of how the film is viewed in Iran.:  They report that according to Iran’s government, the publishing in America of a film that insults the Prophet Muhammad is a despicable act.:  “The Islamic Republic of Iran strongly condemns blasphemy and hurting the feelings of Muslims.”:  Iran then warns America: “this dangerous trend of cultural hatred and insulting the Great Nation of Islam is blasphemy”.

BBC Persia then concludes by relaying how in the United States, preventing the publication of opinions is against the principle of free speech and protected by the U.S. Constitution.

Yahoo News uses its headline to focus on how Stevens was killed and his record of diplomatic service:

Yahoo commits multiple paragraphs to conveying circumstances of the attack on the Libyan embassy, Barrack Obama’s statement condemning the attack, and details about the diplomatic career of Chris Stevens.

Before featuring Stevens’ U.S. Embassy website bio, Yahoo describes how: “Mitt Romney condemned Tuesday’s attacks as “disgusting” and “outrageous,” but he also attacked the Obama administration for standing by a statement issued by the U.S. Embassy in Cairo that he claimed was an “apology” for American values”.

Romney later stated it was “disgraceful that the Obama administration’s first response was not to condemn attacks on our diplomatic missions but to sympathize with those who waged the attacks”.

Wednesday morning Romney did not back down from his earlier remarks: “It’s a terrible course for America to stand in apology for our values.:  It’s never too early for the U.S. government to condemn attacks on Americans and defend our values. … When our grounds are being attacked, being breached, the first response of the United States must be outrage”.

Only when attempting to portray Romney as politicizing events by accusing him of “attacking” the Obama administration, does Yahoo even mention Tuesday’s apology, released by the Cairo Embassy apologizing to Muslims for hurting their feelings. 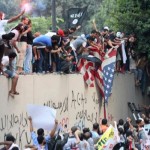 [5]Yahoo never mentions the movie.:  How convenient.:  When the movie is not mentioned, there is no need for Yahoo to explain away the Cairo Embassy apology.:  Since Yahoo publishers chose to omit specific details, there is no need to defend the Obama administration for apologizing (again) to the Islamist world for America.:  Out of sight, out of mind, right Yahoo?

Yahoo News, like other card carrying members of the “progressive” Party Pravda, continues to run interference for the Obama administration, and remains devoted to using their voice in the U.S. news media to ensure his re-election through selective censorship.

Surely Tim Russert is rolling in his grave.