Seldom do I have a nice word to say about Lindsay Graham, who I’d dearly love to see bounced out of the Senate in a primary this year, but the fear of a challenge is at least spurring him to go after the Obama Administration[1]. 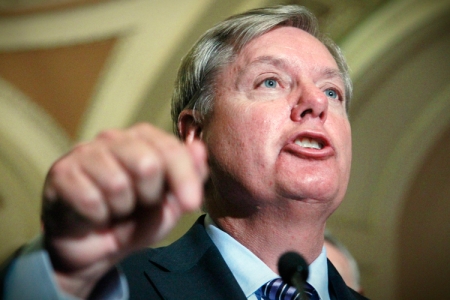 …I don’t think this president is very interested in finding out the truth about Benghazi.

We got photos, a minute-by-minute scenario of what he did as our commander in chief to go after the number one terrorist in the world [Osama bin Laden].

Of course, if Graham doesn’t have a serious primary challenge, he’ll go right back to planting his cheeks firmly on Obama’s backside. In fact, he hasn’t stopped kissing Obama’s behind on amnesty yet; so who knows whether he’ll ever back up his tough talk with any action. Still, when even a wimp like Lindsey Graham is talking tough, that’s a sign that the Republicans are starting to show a little heart instead of just lying back and letting Obama punch them in the face until he gets tired.