The National Enquirer did break the John Edwards affair story, so it does have a little credibility on this topic[1]. However, you have to wonder who their source is that’s feeding them this juicy gossip on the Obamas? 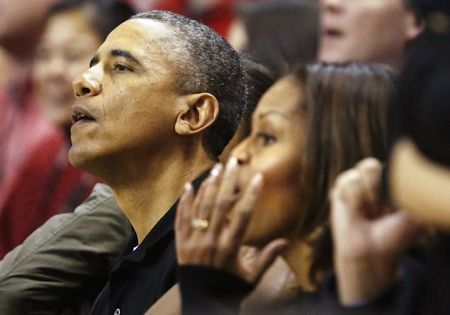 Under the headline Obama Divorce Bombshell!, the National Enquirer claims their 21-year marriage has dissolved in a string of ugly fights that were prompted by the Mandela memorial incident and – far more outrageously – Mrs Obama’s discovery that Secret Service bodyguards had been covering up infidelity on her husband’s part.

It’s an allegation the White House has declined to comment on, though after Bill Clinton’s trouser-dropping scandals, Americans would be rather less sanguine about any extra-marital activity than the French appear to be over President Francois Hollande’s behaviour.

Mrs Obama, the Enquirer claims, intends to stand by her husband until his presidency is over, at which time he will move back to Hawaii, where he grew up, and she will stay in Washington with their children.

…For the moment, they are allegedly sleeping in separate bedrooms after Mr Obama’s attempt to ‘mend fences’ backfired so badly on a recent Christmas getaway to Hawaii that he returned to Washington with their two daughters, leaving his wife behind.

The National Enquirer, it must be said, quoted only anonymous insiders in support of these sensational claims, and is hardly the most reliable source of hard news.

‘There was little conversation and even less romance. She was angry at his selfishness and careerism; he thought she was cold and ungrateful,’ wrote Wolffe.

At the time, Mrs Obama had only recently become a mother – their daughters Malia and Sasha are now 15 and 12. Her husband, whom she had met while they were both working for a Chicago law firm in 1989, was a mere State Senator in Illinois who had just been thrashed in a battle for a seat in Congress.

‘She hated the failed race for Congress in 2000 and their marriage was strained by the time their younger daughter, Sasha, was born,’ wrote Wolffe in Renegade.

Wolffe noted, though, that they seemed to have got over their past issues by the time they made it to the White House.In 2012, meanwhile, political writer Edward Klein claimed Mr Obama had become so depressed about his failing marriage in 2000 that friends feared he was contemplating suicide.

Mrs Obama had been furious because she had warned him not to fight the disastrous Congress election battle which he lost, said Klein.

‘During the dark days that followed his defeat, he turned to Michelle for comfort. But she was in no mood to offer him sympathy,’ wrote Klein, who claimed Michelle’s friends told him she had even drawn up divorce papers.

‘He had dashed Michelle’s hopes of creating a stable and secure future,’ he wrote. ‘As a result their marriage was on the rocks, and Obama confided to friends that he and Michelle were talking about divorce.’

Could the couple have reached such a crisis again?

Michelle Obama doesn’t seem like the most positive, supportive woman in the world and Obama is a narcissist. It’s so easy to imagine her being unhappy and nagging him all the time, him running into some pretty young thing who coos every time he says “hope and change,” and everything progressing from there. That’s essentially how John Edwards ended up cheating on Elizabeth and let’s face it, Obama certainly isn’t the sort to hold off on cheating because of religious beliefs or a desire not to hurt someone else’s feelings.

For the sake of their children, I hope this isn’t true.