Nonpartisan Report: Obama Spends Twice As Much Time On Golfing & Vacations As He Does On Economy

Who would have ever thought that the best thing about being President would be the non-stop golfing and vacations? Sure, you may be too broke to go on vacation because of Obama’s bad decisions, but that isn’t stopping him from vacationing on your dime. A nonpartisan group called the Government Accountability Institute (GAI) just did a report that examines Obama’s schedule. It compared all the time Obama spent in economic meetings over his first term with the time he spent golfing (4 hours per outing) and on vacation (6 hours per day). The conclusion was that Obama spent 976 hours golfing and vacationing while he only spent 474.4 hours on economic meetings. 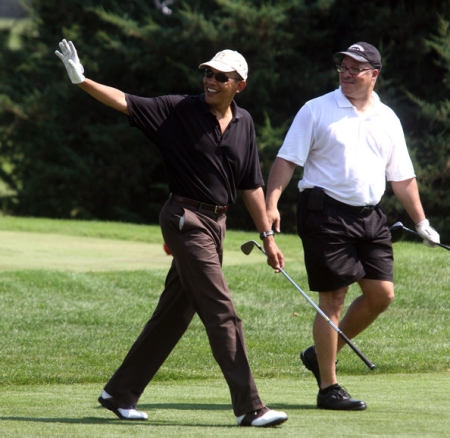 – President Obama has spent 3.6 % of his total work time in economic meetings or briefings of any kind (assuming a six day, 10-hour a-day workweek)throughout his presidency

– President Obama has spent a total of 474.4 hours (or 47.4 10-hour workdays) in economic meetings or briefings of any kind throughout his presidency

– In 2013, President Obama has spent 6 total hours in economic meetings of any kind

– President Obama has attended a total of 645 PDBs (intelligence briefings) since taking office (42.1% of the 1532 days we reviewed)

– Throughout his time in office, President Obama has played 115 total rounds of golf and spent 86 days on vacation, for an estimated combined total of 976 hours

If basketball were added in there, Obama might have been able to triple the time he spent in economic meetings. Of course, given the policies that Barack Obama has implemented, we’re probably lucky he hasn’t spent more time on the economy. In fact, if he spent the rest of his term in office on one long vacation, the country would probably be a lot better off.