Obama Booed at Michigan State Game – By the Student Section

It’s a crazy though, of course, but it turns out that most people don’t feel like being lectured by politicians and Hollywood blowhards. Obama, Joe Biden, and their celebrity buddies decided to force Michigan State fans to watch a PSA during a football game, which led to loud booing… from the student section. 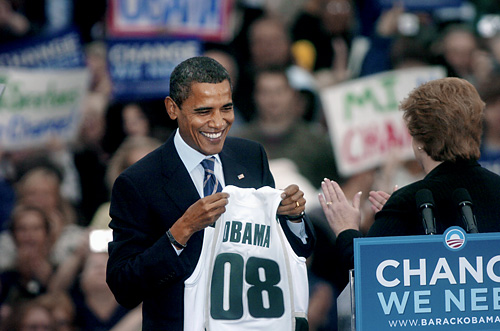 CALLER: Well, I’m glad you’re home. Just something real quick just to go along with what you’re talking about, the president’s favoritism amongst people is low. We went to a college football game here in Michigan this last weekend, and they did a public service announcement during the game. It reminded me more of like a, “yes, we can” kind of deal again, but it was about taking care of each other and working together.

RUSH: Who did the PSA? On whose behalf was it?

RUSH: It was an Obama PSA?

CALLER: And at the very end of the announcement was President Obama. And as soon as his face came up there, there were boos in that stadium that surprised me. I was just so happy to hear it because I thought, you know, it was like a positive thing for me, because it was like, okay, other people are feeling the same way I am.

CALLER: A lot of the people in that stadium –

CALLER: — including the student section.

It was delusional idealistic students that helped get Obama elected to begin with. It says a lot about how horrible his presidency has been when those same people are now booing just because they’re forced to see his face.