Obama Brags About Horrible Jobs Numbers, Then Says THIS About Trump [VIDEO]

What do you do[1] if you are a Marxist president and the job numbers are sooo horrible, that not even you can cover it up with lies? Why, you deflect, of course. That’s what Obama did this week when the job numbers came out showing job cuts at firms jumped… what for it… 35%[2]. Should we be alarmed that the number of job cuts announced by large US companies was 35% higher in April than it was in March? You betcha! But when all else fails, attack your opponent. Obama wants his thugs to look into Trump’s background… something that was never done on Obama. Imagine that… a thug investigating a thug. 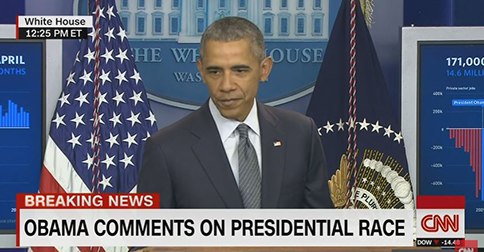 President Obama needed a distraction from his terrible jobs record and he found the perfect diversion.

He took the opportunity Friday, while holding a press conference about job growth, to direct his minions in the media to investigate Donald Trump‘s record.

“He has a long record that needs to be examined,” he said at a press conference on Friday about job growth. “I think it’s important for us to take seriously the statements he’s made in the past.”

“I just want to emphasize the degree of which we are in serious times, and this is a really serious job. This is not entertainment. This is not a reality show. This is a contest for the presidency of the United States,” he added. And he told the media to scrutinize everything. And America laughed. For that matter, so did the media as most are in the tank for Trump. Obama knows this… it’s all theater. “Every candidate, every nominee, needs to subject to exacting standards and genuine scrutiny,” Obama told the reporters in attendance. “What I’m concerned about is the degree to which reporting and information starts emphasizing the spectacle of the circus because that’s not something we can afford,” he said. “And the American people, they’ve got good judgment, they have good instincts, as long as they also have good information.” Excuse me while I clean up the coffee I just spit all over my keyboard from laughing. What hypocrisy. It’s epic. With 7.9 million still unemployed (and I contend the real number is 93 million unemployed) and job creation slowed to a crawl, Obama reached back to tout that jobs have been created every month for the last 74 months. But the Department of Labor’s report showed the weakest hiring in six months, UPI reported. It also showed 300,000 left the workforce altogether, meaning they either quit jobs or stopped looking for work. Obama has destroyed our job market, but unlike many Americans, I don’t think Trump will fix that. I think he will put it on steroids and bring on a grand depression. Bread and circuses anyone?