Obama: “Got Something Better To Replace Obamacare? Then I’ll Support It. Show Me.” [VIDEO]

Talk about hubris.[1] Barack Obama went on Vox and proclaimed that he would publicly support the GOP repealing Obamacare if they can show him what they will replace it with is better. And who would determine ‘better’? Why, Obama of course. He actually got up there and said the Republicans should be transparent and show their plan to the American people the way he did. You mean, like when Pelosi said and I quote: “But we have to pass the bill so you can find out what is in it, away from the fog of the controversy.” Like that? Or how about Obama’s quote: “If you like the plan you have, you can keep it. If you like the doctor you have, you can keep your doctor, too. The only change you’ll see are falling costs as our reforms take hold.” If that is the ‘transparency’ Obama is referring to, he can get stuffed. What a lying hypocrite.

Republicans are getting ready to gut Obamacare and repeal it entirely. It will utterly destroy Obama’s legacy and good freaking riddance. He’s destroyed the best healthcare system in the world, right along with our economy. Obama begged Republicans to do a two-step solution where they repeal the plan and immediately replace it. He doesn’t want it to take months or years to replace. Well, I do. Repeal the damn thing and let the free market fix this. It’s the only way to undo the damage here. Obama is simply laying the groundwork for attack after attack on Republicans by Democrats. 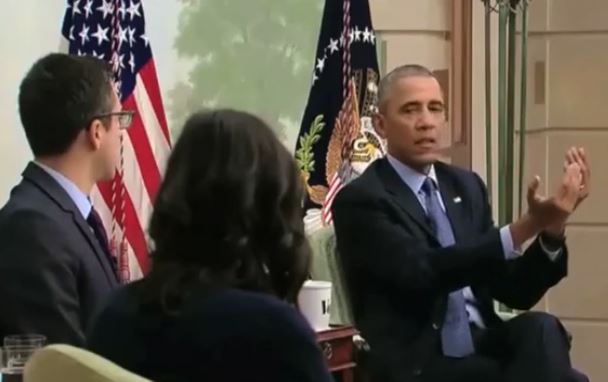 (CNSNews.com) – President Barack Obama said Friday that he would publicly support GOP efforts to repeal and replace Obamacare – and encourage Democrats to support it – if their plan is better.

“I am saying to every Republican right now: if you in fact can put a plan together that is demonstrably better than what Obamacare is doing, I will publicly support repealing Obamacare and replacing it with your plan, but I want to see it first,” Obama said in a White House interview with Vox, adding that he wanted “third party objective people” to evaluate it as well.

“If they can come up with something better, I’m for it, but you have to show— and I would advise every Democrat to be for it,” said Obama.

The president criticized Republicans for being in a rush to repeal the Affordable Care Act without presenting their plan first. He said people need time to examine the plan and determine whether it is better than the current health care law.

Obama wants to know why Republicans are rushing this. Well, because now no one can afford healthcare in this country. It is bankrupting whole segments of our country… it is putting good doctors out of business… it is literally killing people, that’s why, you asshat.

“What you don’t want is a situation where they make a promise they can’t keep,” Obama said. “I’ve worked on this a long time. If we had had a better way to do this, we would have done it. It would have been in my interest to do it, because I knew I was going to be judged on whether or not it worked.” If this is Obama’s best, he’s an utter failure. I don’t care how long the moron worked on it… Marxism doesn’t work in a free market.

Republicans want to offer “universal access” to healthcare. I don’t think that is realistic. Whatever they offer, it will cover fewer people than Obamacare probably, but in an ironic twist, more people will get treated and have stable, affordable healthcare. A key GOP focus is to do away with the individual mandate requirement that all Americans have insurance or pay a fine. Absent that requirement, insurers have warned it’s not financially viable to force them to accept people regardless of pre-existing health issues. And they are right. I’m sorry… that’s pretty much a reality.

Obama has been slinking around DC plotting with Democrats on how to prevent Republicans from repealing Obamacare. But it doesn’t matter… the insurance exchanges and the plan itself are already failing and we better not opt for single payer Marxism here. That would be a nightmare. Leaders in Congress hope to deliver a bill voiding much of the law by late February. America will cheer that and will gleefully watch Obama’s legacy shredded and tossed into the trash heap of political history along with communism.