Anyone paying attention knew that Barack Obama was hostile to Christianity when he ran for president all those years ago. And now we have another example to serve as proof: his disgusting hypocrisy in how he treated a Catholic university versus a Islamic mosque. 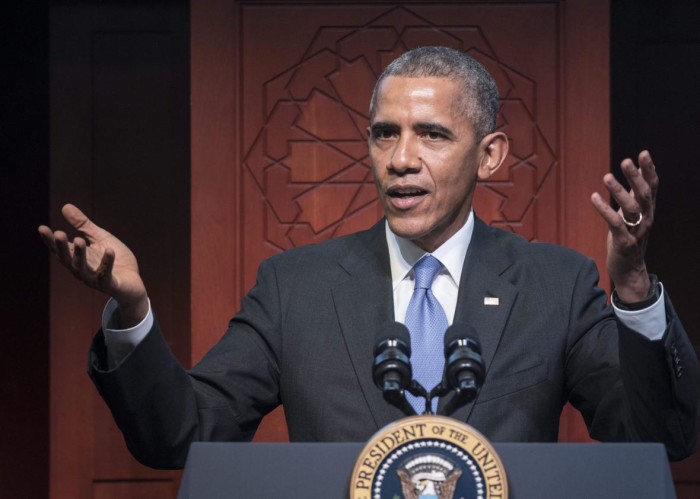 Barack Obama hid the Jesus symbol during his speech at Georgetown.

But Obama allowed the word “Allah” to be widely displayed during his first speech at a US Islamic Center.

… If there was one word which could describe President Obama’s Presidency (aside from failure, Progressive hell, and nightmare) it would be anti-Christian.

From declaring that the United States is no longer a Christian nation to denying Syrian Christians entry into the country President Obama’s distaste for the followers of Jesus are as obvious as the nose on your face. But with less than a year left in his Presidency Obama hasn’t given up on dissing Christians at every opportunity.

For example, President Obama gave a speech at a mosque in the Islamic Society of Baltimore on Wednesday. While standing in front of a glass wall where the word “Allah” was written 99 times in Arabic calligraphy, the President took a stab at Republican Presidential hopeful Donald Trump by stating there was “inexcusable anti-Islamic rhetoric in the political sphere.” The White House staff were even gifted Qurans at the event.

… What makes this entire event a slap in the face to Christians is that while giving a speech at Georgetown University in 2012 the White House told the Catholic school to cover up all religious signs and symbols, including the small letters IHS displayed inside the triangular pediment directly behind and above where the President would stand since the 3 letters signify the name of Jesus Christ.

No one with half a brain will be even the least bit surprised by this. And you’d think that if Obama wanted to quiet those “secret Muslim” rumors, he would stop pulling stunts like this.