Obama Just Threw The U.S. Under The Bus With THIS Statement – This is SICK!

Talk about revisionist.[1] This guy lives in another reality. Obama gave the commencement address at Rutgers University. He had the nerve to tell graduates that the good ole’ days in America were never that great and things are the best they’ve ever been… certainly since he’s been in office. The guy lies so much, he even believes his shtick. The world is not better off… in fact, we are on the precipice of times so bad that we have no reference point for them. I don’t just take Obama with a grain of salt; I take him with a boulder of it. Nothing that comes out of this evil moron’s mouth is the truth. 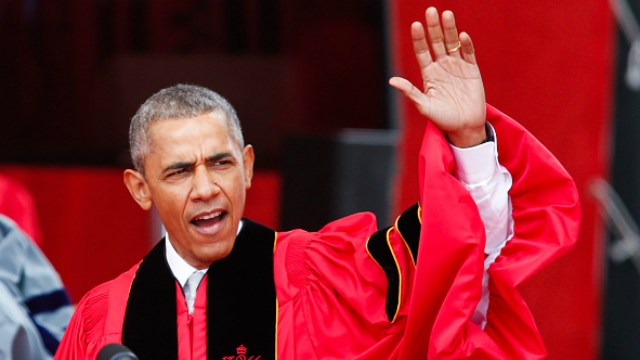 Delivering the commencement address at Rutgers University in New Jersey today, President Barack Obama told the graduates that “the good old days weren’t that good” and that both America and the world are better than they were “even eight years ago.”

Saying that we are better off than 30 or 50 years ago is just ludicrous. Our unemployment rate alone rivals that of the Great Depression. I remember what the 80’s were like under Ronald Reagan. There was a sense of freedom everywhere… that you could do anything. People were happy, not like they are today… depressed and bereft of hope. Only a stone cold Marxist could tell such a bald faced lie. Obama’s transformation of America is almost complete… I don’t recognize my country anymore. And I know with either Clinton or Trump at the helm, there will be even less freedom. I grieve because my grandchildren will never know the sense of freedom I cherished during my life. I never thought America would fall like this. And Obama just keeps on lying. Bread and circuses for fools and sycophants.