Obama Lashes Out at a Reporter for Asking, ‘Why Can’t We Take Out These Bastards?’

President Snowflake does not appreciate being given tough questions from the media that’s supposed to worship the ground he walks on and endlessly prop his presidency up as perfect. And this is why he throws a hissy fit whenever someone dares to question the Dear Leader, as Jim Acosta found out firsthand. 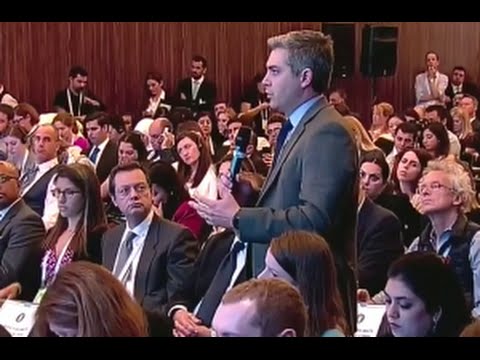 President Obama was visibly annoyed by a reporter’s blunt question about the war against the Islamic State and his underestimation of the group at a press conference Monday.

CNN’s Jim Acosta brought up Obama’s past characterization of ISIS as a “JV team” and his statement Friday prior to the attacks that the terrorist group was “contained.”

He then asked point blank why he has been unable to take them out.

“This is an organization that you once described as a JV team that evolved into a now occupied territory in Iraq and Syria and is now able to use that safe haven to launch attacks in other parts of the world. How is that not underestimating their capabilities?” he asked. “And how is that contained, quite frankly? And I think a lot of Americans have this frustration that they see that the United States has the greatest military in the world, it has the backing of nearly every other country in the world when it comes to taking on ISIS. I guess the question is, and if you’ll forgive the language, is why can’t we take out these bastards?”

The president, clearly annoyed by the line of questioning, gave Acosta an odious response.

“Well, Jim, I just spent the last three questions answering that very question, so I don’t know what more you want me to add,” he said.

How dare someone use the Dear Leader’s words against him?? Hopefully this will be the beginning of the media’s wake-up call, and the end of their fawning adoration of the worst president this country has ever seen.