Obama has really figured out exactly what Americans want: they want Gitmo closed, and for all of the detainees brought to America. And even though Congress doesn’t agree, that’s OK — he’ll just use an executive order to override them! 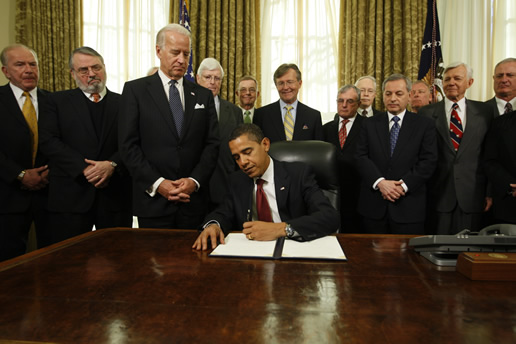 Administration officials told The Wall Street Journal that that the president was weighing two options to force the closure of the controversial facility, which he pledged to eliminate before his election in 2008.

Obama could veto the annual defense spending bill, which includes a provision prohibiting him from moving any of the prison’s remaining 149 inmates back to the United States. Doing so would force Congress to either override with a two-thirds majority or risk cutting off funding to the military.

Or, Obama could — as he has done in the past — sign the legislation but include a singing statement that declares the restrictions on detainee transfers unconstitutional. He could then unilaterally move to transfer the remaining prisoners to a military or civilian prison in the U.S.

Because what could possibly go wrong with bringing a bunch of homicidal Islamic terrorists onto American soil? Sure, they would be in prison, but they’ll also have access to thousands of other prisoners that they can convert and help spread the murderous cult of Islam. But Obama doesn’t care about that, does he? Whose side is he on?