Obama’s wasting billions on food stamps, Obamacare and every other boondoggle you can imagine, but he has no qualms about sticking it to dirt poor soldiers[1]. 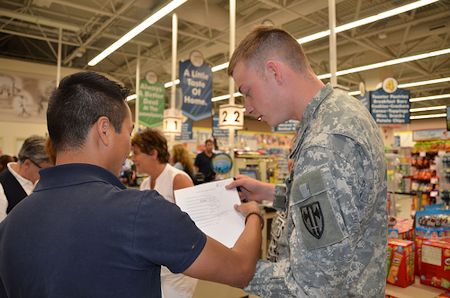 The Pentagon is floating a controversial plan to close all U.S.-based commissaries in 2015 as part of a massive cost-saving effort after more than a decade of war.

The commissaries are grocery stores that offer food and other necessities at a discount to members of the military, their families and veterans. But as Congress tightens the purse strings, the stores could get caught in the budget battle.

Budget cutters say they don’t yet know how much money the plan would save, but there are 178 commissaries in the United States – and 70 overseas – which receive a total of $1.4 billion in government funds.

The Defense Commissary Agency, responsible for administering all commissaries worldwide, says military families and retirees save an average of more than 30 percent on their grocery bills compared with those who shop at regular retail stores. The agency says those savings amount to thousands of dollars annually per family.

But families could also lose jobs if the stores close. Thirty percent of the employees at the commissaries are military spouses. The director of the Defense Commissary Agency says that they have already cut their budget by $700 million since 1993.

Here’s an idea: Instead of giving money to people who hate us like Al-Qaeda in Syria, the Palestinians and the Egyptians, why don’t we take care of our own troops instead?