Of course, Obama claims that he knew nothing about the IRS targeting his political enemies in the Tea Party during the 2012 elections. Of course, rather than backing off after being caught, Obama is actually preparing to ramp up the attacks on his political adversaries[1]. 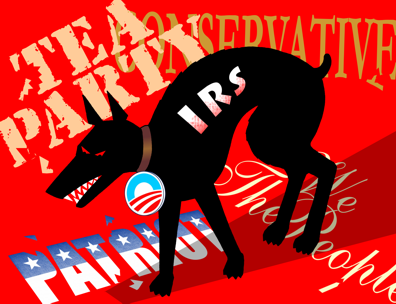 The Obama administration moved on Tuesday to rein in the use of tax-exempt groups for political campaigning.

The effort is an attempt to reduce the role of such loosely regulated yet influential super PACS as Crossroads GPS, which was co-founded by GOP political strategist Karl Rove, and Priorities USA, which ran searing ads against rivals of President Barack Obama to support his re-election last year.

The Internal Revenue Service and the Treasury Department proposed new rules that they said would prohibit such groups from using “candidate-related political activity” like running advertisements, registering voters or distributing campaign literature as activities that qualify them to be tax-exempt “social welfare” organizations.

“This proposed guidance is a first critical step toward creating clear-cut definitions of political activity by tax-exempt social welfare organizations,” said Mark Mazur, the Treasury’s assistant secretary for tax policy. “We are committed to getting this right before issuing final guidance that may affect a broad group of organizations.

“It will take time to work through the regulatory process and carefully consider all public feedback as we strive to ensure that the standards for tax-exemption are clear and can be applied consistently,” Mazur said.

The rules would become final after a lengthy comment period, the federal agencies said, giving the super PACS ample time to raise millions of dollars from anonymous donors before next year’s congressional elections.

Conservative groups bitterly attacked the proposed rules, charging that they represented yet another attack on free speech by the Obama White House.

“This is a feeble attempt by the Obama administration to justify its own wrongdoing with the IRS targeting of conservative and tea party groups,” Jay Sekulow, a lawyer representing more than three dozen of the groups in a federal lawsuit against the tax agency, told The New York Times.

The lawsuit stemmed from the IRS’ monitoring of tea party, conservative, and religious groups for extra scrutiny in their applications for tax-exempt status. A Treasury Department inspector general disclosed in May that the agency was doing the special screenings for those groups seeking 501(c)(4) status.

The status allows such organizations to keep their donors private.

The IRS screening had occurred between 2010 and through the 2012 presidential election. During the period, IRS agents had placed groups with words like “tea party and “patriot” in their names on a “be on the lookout” – or BOLO – list for additional screening of its applications for the tax-exempt status.

“Unfortunately, it appears that the same bureaucrats that attempted to suppress the speech of conservative groups in recent years has now put together new rules that apply to (c)4 groups but do not apply to liberal groups like labor unions,” Nick Ryan, founder of the American Future Fund, told the Times.

This is an attempt by the Obama Administration to reverse the Citizens United Decision which helped Republicans even the playing field on the campaign finance front. Conservatives should fight it in the courts, in Congress, and with the public as they call it what it is: : another attempt by the most corrupt administration in American history to use the IRS to target its political enemies.