Obama Regime is Going After Your School Bake Sales

King Barack and Queen Michelle are doing everything they can to make sure they can hoard as much power as possible over us little people, the peasants. Nothing is too petty for them to try to snatch control over, not even a school bake sale — but for once, the peasants are revolting. 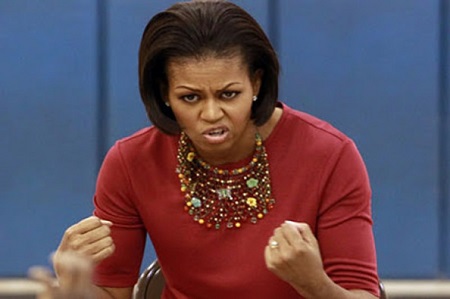 Barely a month after federal regulations for school cafeterias kicked in, states are already pushing back.

Specifically, they’re fighting nutrition standards that would considerably alter one of the most sacred rituals of the American public school system: bake sales.

Twelve states have established their own policies to circumvent regulations in the Healthy, Hunger-Free Kids Act of 2010 that apply to “competitive snacks,” or any foods and beverages sold to students on school grounds that are not part of the Agriculture Department’s school meal programs, according to the National Association of State Boards of Education. Competitive snacks appear in vending machines, school stores, and food and beverages, including items sold at bake sales.

Georgia is the latest state to announce an exemption to the federal regulations, which became effective July 1 for thousands of public schools across the country. Its rule would allow 30 food-related fundraising days per school year that wouldn’t meet the new healthy nutritional standards, which call for more healthy options and less junk food that could contribute to the nation’s child-obesity problem.

The pushback is not about students’ taste buds, but their wallets. Food fundraisers are a crucial source of revenue for schools, state education officials say. “Tough economic times have translated into fewer resources and these fundraisers allow our schools to raise a considerable amount of money for very worthwhile education programs,” the Georgia Department of Education wrote in a recent press release. “While we are concerned about the obesity epidemic, limiting food-and-beverage fundraisers at schools and school-related events is not the solution to solving it.”

Perhaps the Obamas aren’t as concerned with the obesity epidemic as they are with exerting power over every facet of American life? It’s also fairly insulting that Obama’s economic policies are causing these schools to have to get by with less money and fewer resources, and then on top of that, they won’t be allowed to fundraise either. Way to go, Obama.