Hillary Clinton suffered a brutal loss in November to Donald Trump, made all the more humiliating considering that virtually every poll and media outlet predicted an easy win for her. But as election night drew on, it became clear that she was going to lose. It took a phone call from none other than Barack Obama himself[1] to get her to admit reality though. 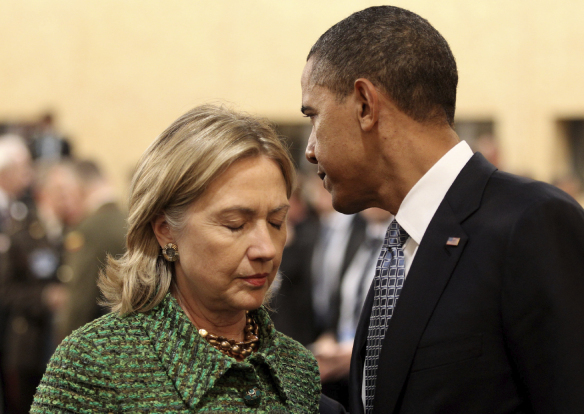 Typically, once it becomes obvious that one candidate will be victorious, the losing candidate gives a concession speech. But Hillary’s concession speech was conspicuously absent. A new book, titled “Shattered: Inside Hillary Clinton’s Doomed Campaign,” gives the inside story of what really happened.

Reportedly, Obama pressured Hillary to concede multiple times. First, he had his political director, David Simas, reach out to Clinton campaign manager Robby Mook. The message was simple: “POTUS doesn’t think it’s wise to drag this out.” Yet Hillary refused to listen.

So, Obama then called Hillary himself, saying, “You need to concede.” Still she didn’t listen. He then called longtime Clinton ally John Podesta with the same message, and finally, Clinton listened. But she still didn’t give the traditional concession speech — instead, she called Donald Trump herself and said, “Congratulations, Donald.”

Obama was still on hand to console Hillary after the bitter loss, though. But Hillary felt it necessary to apologize to him, saying, “Mr. President… I’m sorry.”

The strange thing is, Hillary had known for quite some time that she was not going to win. Around 7:45, vote-counter Steve Schale told Clinton aides in Brooklyn that she was falling behind in Florida, saying, “You’re going to come up short.” According to “Shattered”, Bill Clinton reacted with fury, while Hillary herself became stoic. It was after 11:00 when the calls from Obama began coming in, even though the Clinton team had long known that it was over.

Hillary’s biggest problem here is that she was not prepared in any way to lose. In John Hawkins’ new book ‘101 Things Young Adults Should Know’, he teaches that people must prepare in case it all goes wrong.