Most Americans probably never thought[1] they’d see the day that an American president would willingly appear in a piece of communist propaganda. But then, they probably never expected someone like Obama would be elected, either. 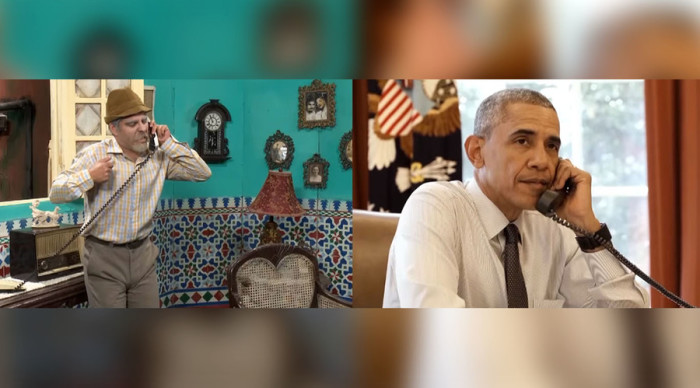 President Barack Obama has appeared in another comedy sketch in Cuba, this time playing dominoes and joking about his limo The Beast in a bizarre skit.

The seemingly carefree president – who was also pictured dancing at a state dinner in Argentina on Wednesday evening – is seen chatting with three actors on a popular Cuban comedy show.

Alongside Panfilo – a bumbling character Obama starred with in another scene before his two-day trip to the communist nation – the president is taught how to play dominoes and praises the Cuban way of life.

The video was released a day after Obama finished his historic visit to Cuba and moved on to Argentina, where is facing a fierce backlash from protesters demanding he return to the U.S..

The five-minute video shows Obama speaking Spanish and English as he chats with the three men in the satirical show Vivir del Cuento.

The president – who appears to have spent time rehearsing his lines – is shown how to play dominoes and praises Cuban food and music.

After mentioning how welcoming Cubans were to him and his family, Obama jokes about his armored limousine, which is nicknamed The Beast.

… In a country where the Communist government tightly controls the media, Pánfilo – an old man played by actor Luis Silva – is allowed to satirize the difficulties of daily life.

Congratulations, Obama. You just lent legitimacy to a dictatorial regime that unjustly imprisons thousands and has killed even more.