The Obama administration has been doing a lot of hand-wringing over the supposed Russian interference with the presidential election last month. But it turns out, they knew about it all along. Obama just didn’t care because he thought Hillary Clinton was going to win. It was only once Hillary lost that he suddenly thought it was a problem[1]. 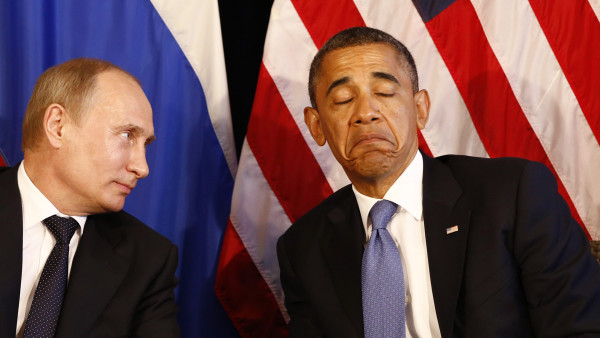 Multiple Obama administration officials told NBC News that Obama didn’t respond forcefully to the Russian hacking threat before the election. But he didn’t think it was worth a potential cyber war with Russia if Hillary was going to win the election. “They thought she was going to win, so they were willing to kick the can down the road,” one official said. Obama did confront Putin privately before the election, at the G-20 summit in September, warning him that there would be “consequences” if the hacking continued. But he took no action to prevent it from continuing.

In October, the Department of Homeland Security and the Office of the Director of National Intelligence issued a statement saying that hacks of political groups, as well as politicians, could only have been done with the permission of Russia’s most senior officials and that the intent was clearly to interfere with the election.

Members of both political parties have heavily criticized Obama for not responding more forcefully to the hacks when he first learned about them. “I think it is a legitimate question and I think given the stakes at the national level the question deserves an answer,” retired Adm. James Stavridis said. “In retrospect it certainly seems as though it was a mistake not to call the Russians sooner and respond to them in a very forceful way.”

Administration officials, however, criticized the media, saying they focused more on the content of the leaked documents than they did the actual hacking operation. The media chose not to pay any attention to it.

But it wasn’t until Hillary Clinton lost the election that Obama began to take the Russian hacks seriously. Donald Trump himself even questioned the Obama administration’s response, tweeting, “If Russia, or some other entity, was hacking, why did the White House wait so long to act? Why did they only complain after Hillary lost?” It was a change from his previous stance. Trump has argued for months that Russia was not involved in the hacks. Now, top aide Anthony Scaramucci said that Trump needs more time to analyze the intelligence. “I wonder whether the tweet the president-elect sent out today is the beginning of his pivot, the beginning of his acknowledgement of the intelligence that Russia has been hacking our institutions,” Rep. Adam Schiff, a Democrat, said in response. Schiff is the ranking Democrat on the House Intelligence Committee.

According to intelligence officials, Russia had multiple motivations for interfering with the election. First, it began as a personal vendetta against Hillary Clinton — Putin simply wanted to prevent her from winning. But it soon grew into a ploy to show corruption in American politics, with the Russian government wanting to “split off key American allies by creating the image that [other countries] couldn’t depend on the U.S. to be a credible global leader anymore.”