Obama Thinks FORCING People To Do THIS Would Be ‘Transformative’

On his home turf[1], Obama addressed students at the University of Chicago Law School. He elaborated that our entire voting system is rooted in racism and it’s all white people’s fault. He says the system discourages blacks from voting. Then he obliquely went on about how ‘reducing polarization’ in politics would make things better. Translation: one party, with one leader is the ticket and those who disagree need to be censored and silenced. I don’t remember it being hard for anyone to vote. You register, you show your ID, you vote and then you get your sticker. How hard is that? Unless of course you are an illegal immigrant, a felon or an Islamic refugee. That is who he is referring to here as the Democrats want to pad the voter roles with these people, so they can stay in power. But Obama will never come out and tell you the truth. No, he hides behind the race card. 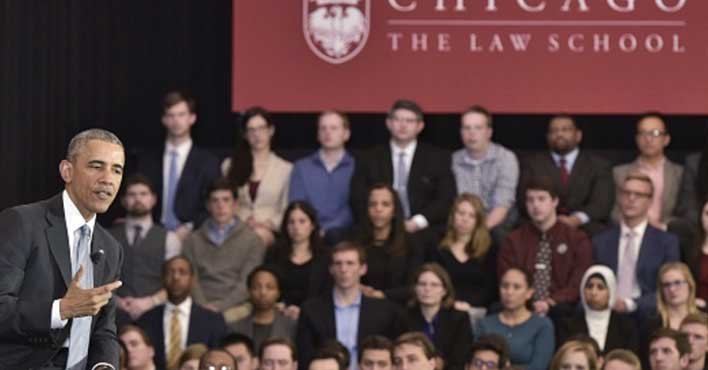 President Barack Obama, while addressing students at the University of Chicago Law School, opined that America’s voting system is “rooted in racism” because it “unabashedly discourages” some Americans from voting. He suggested “reducing polarization” in politics might help improve things.

Then, he added that “white folks” have been the problem all along:

“We really are the only advanced democracy on earth that systematically and purposefully makes it really hard for people to vote,” Obama said Thursday when speaking at the University of Chicago School of Law. “There is no other country on earth that does that. There is a legacy to that that grows directly out of a history in which first propertied men, then white men, then white folks didn’t want women, minorities, to participate in the political process and be able to empower themselves in that fashion. That’s the history. We should be a society in which at this point we should say, yeah, that history is not so good.”

President Barack Obama also touted “mandatory voting” in America. How very totalitarian of him. Just like Obamacare, he would impose a mandate to vote. “Maybe the single biggest change that we could make in our political process that would reduce some of the polarization, make people feel more invested and restore integrity to the system is just make sure everybody is voting,” Obama said. “Australia has got mandatory voting. If you start getting 70 or 80 percent voting rates, that’s transformative.” You betcha it is… right into a dictatorship. Obama didn’t specify any federal or state law, but he has been highly critical of state voter ID laws. More: “At this point, we should be at the point were we say, ‘You know what? We want everybody to vote.’ Because that’s the essence of our democracy,” Obama said. “But we have not just federal laws but state laws that unabashedly discourage people from voting, which is why we have some of the lowest voting rates of any advanced democracies in the world. That’s a problem.” I’ll tell you what we had better do… vote these Marxists out of office and fast.