Obama On WORLD Stage: ‘I Believe Deeply that the Liberal International Order…Is the Only Choice’ 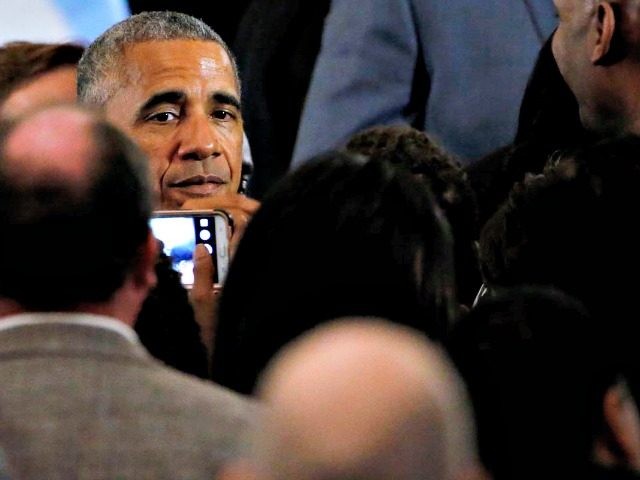 When the younger Bush left office, he spent his time learning to paint and getting involved in veteran’s rehabilitation charities. When Obama left office, he simply moved into a nicer house elsewhere in D.C.

Two very different mindsets. One wanted to retire, the other is looking forward to decades of influence-brokering and raking in cash for appearances.

On Monday, former President Barack Obama spoke at the Asian Leadership Conference in Seoul, South Korea, and met with their President Moon Jae-In where the Korean president “renews his resolve[2] to pursue sanctions and dialogue to tackle North Korea’s nuclear program” during his meeting, indicating that this was North Korea’s “last chance” to return to negotiations.

Why on earth is the former President of the U.S. getting involved in the delicate matter that is North Korea, especially when Trump has been very public in his dismissal of Obama’s view toward North Korea, saying that he will end Obama’s “strategic patience” with the Communist, militaristic, volatile nation? Trump has also said that the American and South Korean government have a “very, very strong and solid plan” to deal with the North Koreans.

But still, Obama found a way to insert himself into the conversation where he has no business.

At the conference, where Obama met with his “old friend,” former President Lee Myung-bak, the former president took a jab at Trump over his decision to remove the U.S. from the Paris climate change agreement and expressed his belief in an “international order.”

“In Paris, we came together around the most ambitious agreement in history to fight climate change — an agreement that, even with the temporary absence of American leadership, will still give our children a fighting chance,” Obama said.

“Democracy is hard,” Obama said. “Progress does not move in a straight line. Its gains are often fragile.”

Yeah and democracy asked you to retire a few months ago, and democracy rejected your presumed replacement in the form of Pantsuit Clinton.

Obama said that “the future does not favor the strongman,” but my belief is that the future favors the one who shows up for it — and that Obama should stop showing up where he doesn’t belong.