Is throwing darts at Obama’s face over the line for a county fair[1]? Maybe, but I definitely would have dropped $1 to throw three darts if I had been there. Would you? 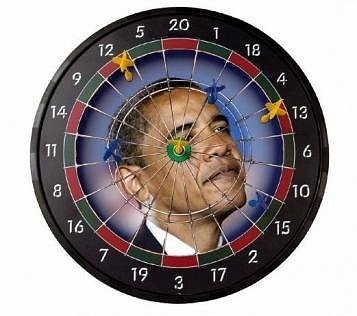 Fairgoer Abigail Czapsky submitted photos of the booth at Otsego County Fair to HuffPost yesterday, which show President Obama’s zface lined up alongside yellow stars in a dart game.
According to Czapsky’s Facebook page, following yesterday’s HuffPost story the booth has now taken down the offensive targets.

Czapsky says the Otsego County Fair Board called her to apologize about the booth and explain that it was being taken down.

You can actually find Reagan, Bush & Clinton dart boards for sale online; so if people want to toss darts at Obama’s face, why not? Granted, it’s not particularly respectful, but if Barack Obama doesn’t respect the position he holds, it may be asking a little much to expect a county fair to slap down the “we must be respectful of the presidency” card.