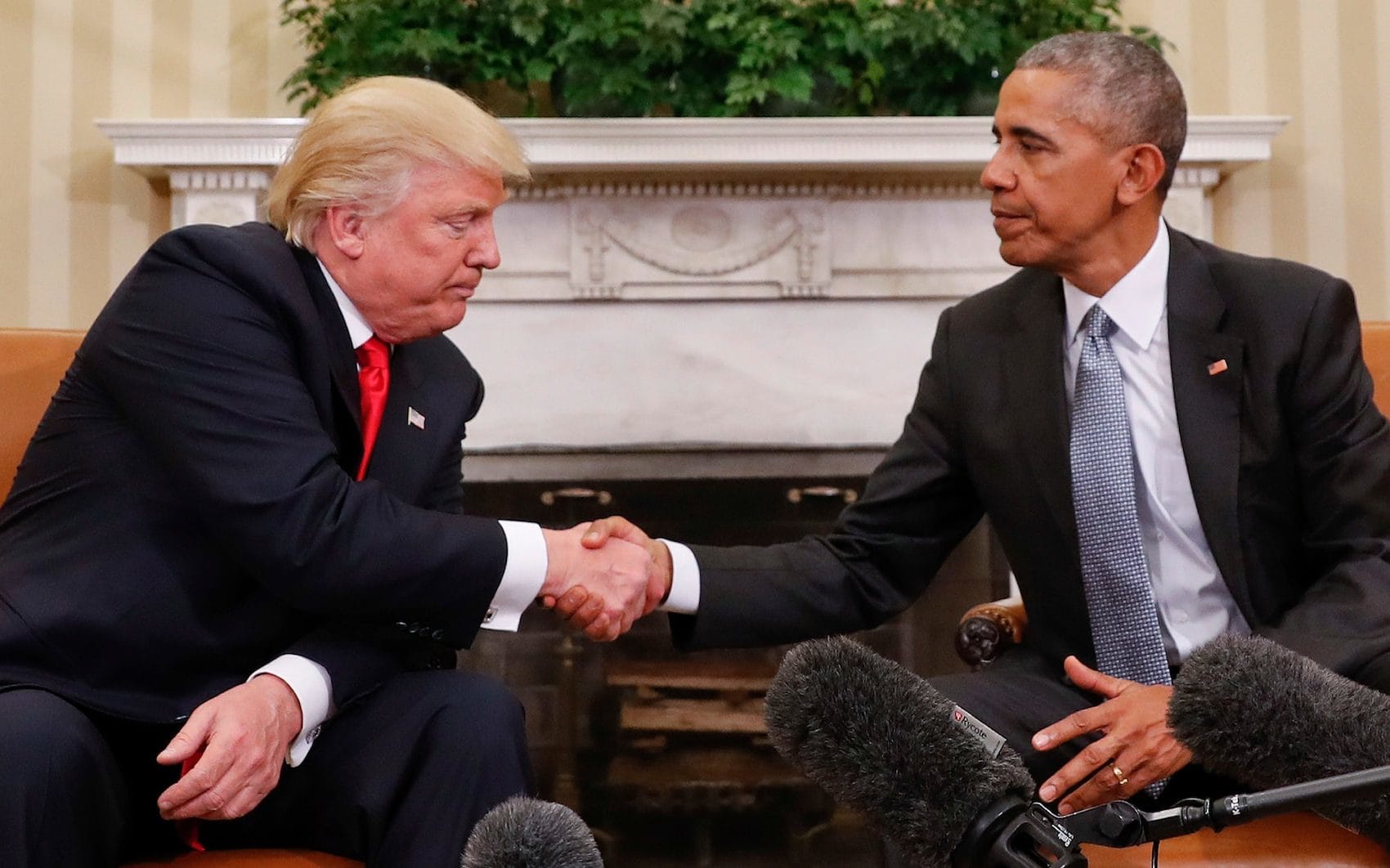 Democratic Blowhard-in-Chief Barack Obama was a condescending know-it-all til his last days in the White House. And now we have the letter he wrote as a welcoming gift to Donald Trump for proof.

Presidents have been leaving notes for their incoming replacement in a tradition spanning back centuries. Usually just a few pages long and written by hand, they contain parting advice and positive encouragement written privately by the outgoing President to their successor. We have access to a few letters from the past, but they usually remain privately held for years before being declassified. But Trump being Trump, he’s been showing his letter from Obama off to visitors and we now have a copy of Barack’s words.

When Bill Clinton took office in 1993, George H.W. Bush left him a short note. Here’s part of it:

When I walked into this office just now I felt the same sense of wonder and respect that I felt four years ago. I know you will feel that, too…

You will be our President when you read this note. I wish you well. I wish your family well…”

But when it’s time for the high-and-mighty scholar Barack Hussein Obama to leave a note, he talks down to Trump instead of as an equal. Here’s the full transcript of the note Obama left in the Resolute desk, (emphasis mine):

Congratulations on a remarkable run. Millions have placed their hopes in you, and all of us, regardless of party, should hope for expanded prosperity and security during your tenure.

This is a unique office, without a clear blueprint for success, so I don’t know that any advice from me will be particularly helpful. Still, let me offer a few reflections from the past 8 years.

First, we’ve both been blessed, in different ways, with great good fortune. Not everyone is so lucky. It’s up to us to do everything we can [to] build more ladders of success for every child and family that’s willing to work hard.

Second, American leadership in this world really is indispensable. It’s up to us, through action and example, to sustain the international order that’s expanded steadily since the end of the Cold War, and upon which our own wealth and safety depend.

Third, we are just temporary occupants of this office. That makes us guardians of those democratic institutions and traditions — like rule of law, separation of powers, equal protection and civil liberties — that our forebears fought and bled for. Regardless of the push and pull of daily politics, it’s up to us to leave those instruments of our democracy at least as strong as we found them.

And finally, take time, in the rush of events and responsibilities, for friends and family. They’ll get you through the inevitable rough patches.

Michelle and I wish you and Melania the very best as you embark on this great adventure, and know that we stand ready to help in any ways which we can.

So first: He’s implying that Trump was lucky to win the Presidency. It belonged to Hillary, right? He didn’t build that campaign! He didn’t amass his own wealth! It was just pure luck!

Second, “It’s up to us to do everything we can [to] build more ladders of success…” That [to] means that Obama, genius speech writer and all around smartest-guy-ever omitted the word to from his sentence. You’d think if you were leaving behind an historical document, you’d maybe get someone to proof read it, or at least read it out loud to yourself to make sure there are no errors.

Third, thanks for the civics lesson! As if Trump didn’t realize that he’s a guardian of democratic institutions. He thought he was just going to D.C. to play pretend. Trump is 15 years older than Obama, but Obama still feels the need to write up a high school lesson in the duties of the President.

Twitter weighed in. Grant Stern lists #OccupyDemocrats on his Twitter bio, so of course he’s fawning over the letter and ripping on Trump for the letter being too complicated.

I can’t imagine the world you live in to think that running multi-billion dollar companies and the United States of America can be accomplished by an idiot. Then again, Democrats think real estate and construction is about as complicated as installing a shelf from Home Depot.

The publisher of WikiLeaks, Julian Assange, points out that Obama admits that America’s place is at the front of the world stage.

Obama's "secret" hand-over letter to Trump leaked to CNN. It has three points. The first substantive one? Sustain the empire. pic.twitter.com/8G1XK8zXUQ[4]

Pres. Obama's transition letter to Trump is a classy, eloquent, and generous "fuck you", and I am absolutely here for it.

And CNN flunky David Axelrod is similarly flushed and excited at the notion of Obama’s super smartness.

What wise and eloquent advice from one president to another. Sad how thoroughly @POTUS[7] has disregarded it! https://t.co/35QSADOxm2[8]

I’ve written a lot of emails. Flourished, fancy writing is for books. Be straight and direct in every other situation. Obama’s letter is trying to be a piece of great literature, but Donald is just trying to run the country like a business, not a book shop.