Given that Obama spent his childhood surrounded by Communists, criminal degenerates, and drug dealers, it’s no surprise that he turned out to be such an amoral human being[1]. 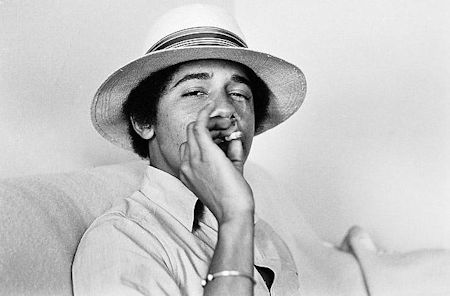 President Obama’s high school pot dealer who he thanked in his yearbook for the ‘good times’ was beaten to death by his lover after a series of fights over flatulence and drugs, MailOnline can reveal today.

Raymond Boyer, known as ‘Gay Ray’ to Obama and his marijuana smoking ‘Choom Gang’, was bludgeoned to death with a hammer seven years after he sold the future president and his friends drugs.

His lover Andrew Devere, a male prostitute, gave police a laundry list of reasons for the killing, including that Boyer, a surfer and unemployed chef, constantly put him down, made him beg for drugs and had a habit of breaking wind in his face.

The sordid end to the life of Boyer at 37 was in direct contrast to the young men he supplied drugs to who all went on to lead successful and productive lives.

Since getting high with Obama and his private school educated friends he lost his job as the manager of a local pizzeria and ended up on welfare living above a car repair shop.

The full extent of Ray’s grisly end and the bizarre reasons for it were set out in mitigation by Devere, who was jailed for life for the murder.

Appeal court documents from 1991, uncovered for the first time by MailOnline, reveal Devere killed Boyer on New Year’s Day 1986 because: Boyer was killing a friend of his by supplying that friend with drugs; Boyer embarrassed Devere and put him down in front of other people; Boyer had developed a habit of farting in Devere’s face; Boyer once attacked Devere with a knife, slicing Devere’s finger; Boyer made Devere beg for drugs.

Finally, the documents say the last straw came on the morning that Devere killed Boyer when the victim had refused to give Devere money to buy medication to soothe the murderer’s sore throat.

It took a British paper, the Daily Mail, to reveal information that the mainstream media would have made common knowledge in 2008 if Obama had been a Republican. What a terrible example Obama is for the children of America. Hey, kids, if you take drugs, hang out with dirtbags and lie enough — you, too, can be the worst President in American history one day!