I’m not exactly sure how it is that a man as arrogant as Barack Obama here in the United States, can go overseas and turn into Waylon Smithers with all this bowing. Perhaps he doesn’t realize how repulsive it is to other Americans because he spent so much time overseas and doesn’t fully understand American values, but the President of the United States doesn’t bow. If he didn’t know it before, he should know it now after all the criticism he has received for it. Worse yet, apparently this picture was taken shortly after his bow to the Chinese PM: 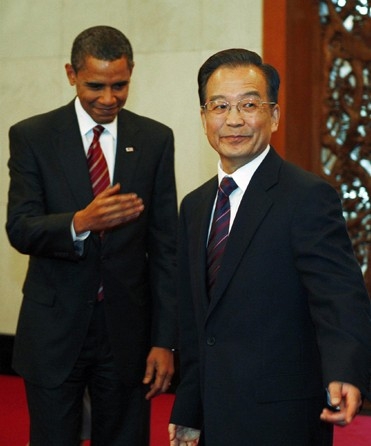 As an American man, I just want to turn my head in embarrassment when I look at that cringing, servile posture from Obama and the smug little smile from Wen Jiabao. Obama is the President of the United States and he looks like Jiabao’s manservant in that picture. If Obama doesn’t have enough pride in himself not to behave that way, he should at least pretend to have some for the sake of his country.