Obama’s Slogans Seem To Suggest He Thinks His Supporters Are Idiots — And He May Be Right.

In 2008, Barack Obama was a human Hallmark card. He ran the most vapid, meaningless campaign in living memory. He ran on “Hope, “Change,” and “Unity,” and being the first black President, none of which hint at his agenda or why he’d be a good President. It was a campaign designed to appeal to imbeciles and 19 times out of 20, it probably would have failed. Fortunately for Obama, the outgoing Republican President had an approval rating of 25% and John McCain was about as inspirational as a soccer game played in a pool.

The horrible performance of the GOP desperately made people want an alernative and paradoxically, Obama’s vacuousness and his lack of qualifications for the job allowed people to project whatever traits they wanted to see on Obama. Liberals correctly saw a socialist, but moderates saw another moderate, and even a few conservatives thought he might not be so bad. This actually had more to do with the sheer awfulness of the GOP than Obama, but it still allowed him to get elected.

Well now, Obama has an exciting new slogan that was once used by the Hitler Youth: Forward[1] 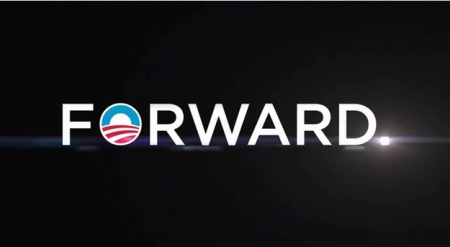 Judging by Hitler’s experience, young voters did seem to like the slogan and you do have to certainly admit that they moved “forward.” Of course, that’s the problem with empty slogans like “forward” — you may be moving “forward” in a really scary direction.

It’s also worth noting that the people who most want to just move “forward” are usually the people who’ve been fouling up everything they’re touching in the present. Know who else would probably love to make “forward” their slogan? Casey Anthony, O.J. Simpson, Bernie Madoff, Eric Massa, and Anthony Weiner. What do you think Bill Clinton probably told Hillary right after she first found out about Monica Lewinsky? “C’mon honey, let’s move forward!”

Unfortunately, Bill just screwed Monica and Gennifer and who knows how many more. Obama has been screwing the entire country since he was elected. That’s why Mitt Romney will spend a lot more time talking about Barack Obama’s record than Obama will over the next few months. If Obama can make everyone forget losing our AAA rating, ending our manned space flight program, the stimulus, killing the job market, the bailouts, unsustainable spending, screwing up the war in Afghanistan, Fast and Furious, funneling billions to his union cronies in Detroit, Solyndra, and destroying our healthcare system by shouting “forward,” then this country is in a lot more trouble than most people realize.