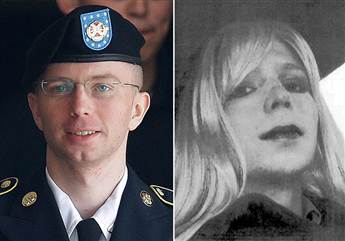 This has lefties squeeing, and they’re super excited that Obama has more commutations[2] than any other president. Somehow, they think that commuting the sentences of scumbags, domestic terrorists, people with violent gun charges, and those who damages the US national security is a Great Idea

(UK Guardian[3]) Chelsea Manning, the US army soldier who became one of the most prominent whistleblowers of modern times when she exposed the nature of warfare in Iraq and Afghanistan, and who then went on to pay the price with a 35-year military prison sentence, is to be freed in May as a gift of outgoing president Barack Obama.

In the most audacious – and contentious – commutation decision to come from Obama yet, the sitting president used his constitutional power just three days before he leaves the White House to give Manning her freedom.

Manning, a transgender woman, will walk from a male military prison in Fort Leavenworth, Kansas, on 17 May, almost seven years to the day since she was arrested at a base outside Baghdad for offenses relating to the leaking of a vast trove of US state secrets to the website WikiLeaks.

Liberals are all rejoicing[4], and thrilled that Bradley (no, I’m not calling him by his gender confused name, or referring to him as her) will be soon released. They feel that he is just a dupe in the whole thing, and, really, show that they don’t give a damn about law and national security. At the end of the day, he confessed to the crime. He did the crime. It doesn’t matter if he was led on by Julian Assange. He. Did. The. Crime.

If someone is duped into committing murder, does it matter? No. And, from what we have seen on college campuses, if someone commits sexual assault while under the influence of drugs and/or alcohol (let’s not forget that Leftist talking points push people to do drugs), they will be destroyed, rather than understanding that they weren’t in control. And, yes, for real sexual assault, they should be prosecuted. But, it’s a big double standard for liberals.

“[He is] an extremely left-wing ideologue… [and is] showing himself to be anti-law-and-order and… anti-military,” Stein said.

Obama also commuted the sentence of Oscar Lopez-Rivera, who is in prison[6] for domestic terrorism, attempting to overthrow the government, and setting up booby trap bombs, among others. As that Right Wing News post shows, unrepentant domestic terrorist and Obama pal Bill Ayers tweeted

Leonard is Leonard Peltier[8], who killed two FBI agents in cold blood, and is currently serving a term that would end in 2040 for first degree murder. “Free Leonard” is a slogan that has popped up and been used at lefties who support this scumbag, much like they support cop killer Mumia.

Ethel is most likely Ethel Rosenberg, who is rather dead, having been executed for espionage back in 1953. Their sons, and other loony Lefties, have been pushing for a pardon[9] for her. She was guilty[10]. Period.

Will Obama Free Leonard and Pardon Ethel? With just a few days left, who knows? Every scumbag who receives a commutation should be shipped to D.C. and released in front of Obama’s house. Or, wherever Obama happens to be. Usually the golf course.

As many have noted, imagine the outcry if Manning had been involved in leaking information on Democrats. How would liberals have responded to having his sentence commuted?