The ever-morphing policy positions of Mitt Romney are sufficiently disturbing on their own.

But if it’s true that Romney consulted with Obama’s crazed ‘Science Czar’ John Holdren[1], he should step out of the GOP race today.

Barack Hussein Obama has clotted the executive branch with unaccountable “czars” – unsavory characters too extreme to be confirmed for cabinet positions even by a hyper-partisan, Democrat-controlled Senate. Among the most alarming of these malevolent lunatics is Science Czar John Holdren, a participant in ClimateGate who has advocated de-developing America and putting sterilants in the public water supply… 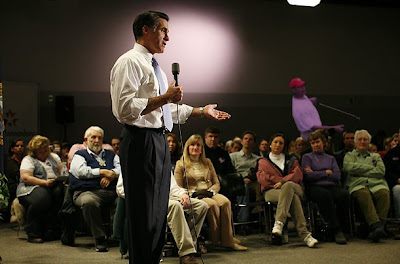 …Holdren has also spoken in favor of forced abortions, confiscation of babies, targeted as well as mass involuntary sterilization, bureaucratic regulation of family size, and global authoritarian government. If there is a line between ultra-left ideologue and evil maniac, Holdren clearly crosses it. No one to the right of Pol Pot would want John Holdren advising our leaders.

This brings us onto still more common ground between Barack Obama and Willard “Mitt” Romney. From an official memo released by Willard’s office when he was Governor of Taxachusetts, announcing “Strict New Clean Air Regulations“ [i.e., Cap and Trade]…

…Sound familiar? Obama wanted to impose Cap & Trade nationwide, but it would so obviously cripple the economy that he couldn’t get it through a Democrat Senate that was radical enough to pass ObamaCare – the national version of RomneyCare.

Now to the even scarier part: In the development of greenhouse gas policy, Romney Administration officials have elicited input from environmental and economic policy experts. These include John Holden [sic], professor of environmental policy at Harvard University…

Of course, that was back in 2005. By now everyone knows that global warming is a hoax, and CO2 is harmless. Everyone except Mittens, that is. He continues to proclaim that economic activity makes it be too hot out.

This comes on the heels of reports that President Obama met with Romney’s key advisers while designing Obamacare[2].

Newly obtained White House records provide fresh details on how senior Obama administration officials used Mitt Romney’s landmark health-care law in Massachusetts as a model for the new federal law, including recruiting some of Romney’s own health care advisers and experts to help craft the act now derided by Republicans as “Obamacare.”

Romney’s shape-shifting positions are so flagrant that even Democrats are producing flip-flop videos of the sort that pulverized John Kerry in 2004[3].


Related: Early glimpse at the official 2012 Obama bumper-sticker (if they accept my design proposal)[4].