CBS exposing Obama[1] paying for the renovation of mosques is actually a story from 2015. But it got little media attention then and he’s still doing it. He’s diverting hundreds of millions of US dollars to overseas mosques to renovate them. Tell me again how he is not a Muslim. This just screams it. And people wonder why he grovels before the Mullahs of Iran… why he gives ISIS a pass… why he is terraforming the US into a Muslim nation.

Set aside for a moment that we are broke, due to Marxist policies implemented ever since Reagan left office… it’s where the money is being spent that makes your blood run cold. By all accounts, we are funding Islamic terrorists right and left. We are funding their countries, their schools, their mosques… we are funding their wars as well, even against America. 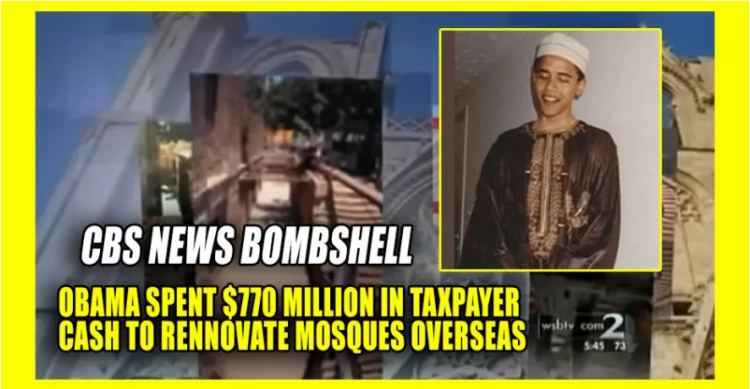 “You Didn’t Build That”…Oh Wait, You Did!

A CBS news investigation found that the Obama State Department is sending hundreds of millions of dollars to save mosques overseas — outraging taxpayer advocates and raising enormous questions about aid to potentially terror-supporting groups with U.S. foreign aid.

The United States ‘investment’ of millions to refurbish mosques as a ‘good-will effort’ in Muslim countries has upset many.

“We are spending money we don’t have. This is all on a gigantic credit card right now,” said Jared Thomas, a taxpayer advocate.

Millions more dollars have been sent to places like Cyprus. The State Department displays before and after pictures of mosques refurbished with U.S. tax dollars.

Many of us lost almost everything in the last economic downturn. Fully one third of Americans are now out of work. We can’t make ends meet and our country can’t pay its bills… yet somehow, Obama can send well over $770 million to Islamic countries to refurbish their mosques. It makes your eyes bleed.

The State Department declined a CBS Atlanta News request for an interview. Anchor Justin Farmer wanted to ask why we are using tax dollars to refurbish religious buildings overseas – something we all want to know. The State Department did send CBS Atlanta News an email saying that they are: “Fighting Islamic extremism by building relationships with Islamic leaders.” What bovine excrement.

Let me spell it out. Our so-called wealth is being redistributed to Islamists and their countries. Our treasury is being emptied and given to terrorists. Then we invite these enemies in and place them in positions of power in the US. And while we are at it, we bring in hundreds of thousands of Muslim refugees and place them throughout the country, especially in conservative strongholds, thereby changing and controlling the voting demographic. This is a coup from without and from within… the enemy is now among us.