The Parallels Between Obama and Lincoln – (They Are Uncanny!)

Frankly, I have never even remotely considered[1] any comparison between Abe Lincoln and Barack Obama. Shudder. But here are some you might consider.

1. Barack Obama and Abe Lincoln both used the very same Bible to swear in on at their inaugurations.

2. Both of them came from Illinois.

3. Both of them served in the Illinois Legislature.

4. Both men had very little experience before becoming President.

5. Both men rode the train from Philadelphia to Washington, DC for their inaugurations.

6. Both men were loved by some and abhorred by others.

8. Both men were lawyers. 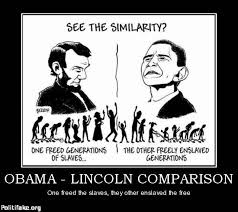 Most of us know of the comparable relationship between Lincoln and Kennedy; but have you ever considered the comparisons between President Obama and Lincoln? You might be quite surprised…

And that is pretty much where the similarities end. Lincoln was a devout Christian conservative who deeply believed in the Constitution. Obama was a collectivist with an Islamic penchant even though he pretended to be a Christian. He taught constitutional law and hated our Constitution with a passion. He felt it needed a do-over. Lincoln volunteered in the Illinois militia; once as a captain, twice as a private. Obama never served and in fact, hates our military.

Lincoln also believed in carrying your weight and working for what you receive. Obama believes in the Cloward and Piven strategy. He put millions on welfare and food stamps to make them totally dependent on the government. In other words, he’s a Marxist. Lincoln freed the slaves and dealt with the biggest internal conflict our nation has ever known… the Civil War. Obama basically sold Americans into slavery and want, and deflected from confronting any of our enemies, whether they were internal or external. He himself was an enemy from within.

Lincoln was born in the US and lived here his whole life. Obama was born in Kenya (or Hawaii, or somewhere) and pretended to be an American. Abraham Lincoln was known for his honesty. Obama was known for the very opposite of that. But he never stopped claiming he was the most transparent president ever. Lincoln made America strong and she was respected by the world while he led the US. Obama made us a worldwide laughing stock. And finally, Lincoln loved our country, our flag and our military. Obama hates all of those and instead wants a world government to rule over the inhabitants of this planet, preferably with himself as the leader.

The few similarities and stark differences of these two men are obvious and sobering. It boggles my mind that the same country that could elect someone like Abe Lincoln has sunk so low that they would elect Barack Obama. 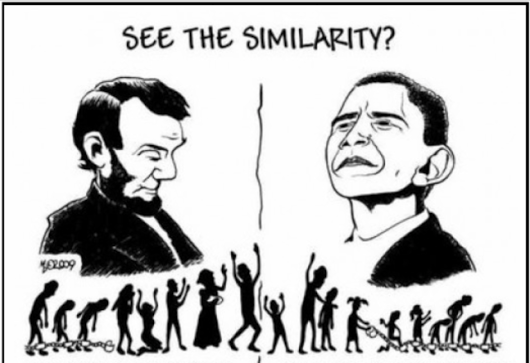