Barack Obama and his family may have left the White House, but their new digs aren’t too shabby. The Obamas relocated into a multi-million dollar home in Washington, D.C., which is currently being renovated. And people have noticed something strange[1] about the home. 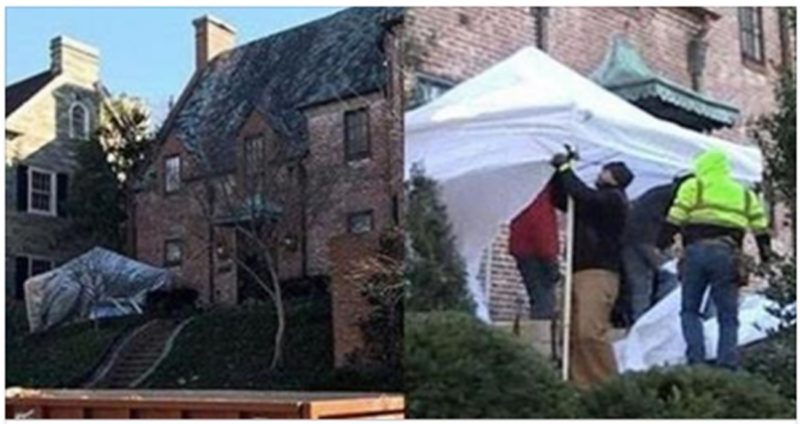 The Obamas’ new home is located in Kalorama, an exclusive D.C. neighborhood. Built in 1928, the home is currently owned President Bill Clinton’s former press secretary Joe Lockhart and his wife, Giovanna Gray. But before moving in, the Obamas began renovating the home.

Already known was a new state-of-the-art security system. But it was the garage renovations that caught the eye of their neighbors; it turns out that Obama is turning the garage into a second office. Many are now wondering if this signifies that Obama will not be spending his post-presidential retirement quietly, without meddling in politics.

“I’m going to be constrained with what I do with all of you until I am again a private citizen,” Barack Obama said previously, not long after Donald Trump won the presidential election. “But that’s not so far off. You’re going to see me early next year and we’re going to be in a position where we can start cooking up all kinds of great stuff to do.”

So far, both Barack and Michelle Obama have kept a relatively low profile, enjoying expensive vacations around the world with A-list celebrities. Both Barack and Michelle are suspected to be signing multi-million dollar book contracts. “His is going to be easily the most valuable presidential memoir ever,” said Raphael Sagalyn of the ICM/Sagalyn Literary Agency. “And I think Michelle Obama has the opportunity to sell the most valuable first lady memoir in history.”

For her part, Michelle Obama has said that she plans to continue her advocacy work for women’s education. “I am so excited to continue working on this issue not just for the next seven months as first lady, but for the rest of my life,” she said at the United States of Women summit. “And it’s going to be good work, because there are a lot of good partners in this room. And I am so looking forward to really diving in.” But Barack’s plans remain a mystery.

Are you worried about what Barack Obama may have planned?