“Real Time” host: Bill Maher: caused some real confusion with his knee-jerk liberal guests Friday night when he offered them a “racist” quote from: Paul Ryan: that turned out to really be from: Michelle Obama.

And he did it to make a point. 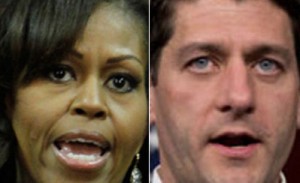 Maher was piling on the latest liberal meme of Paul Ryan as piÃ±ata for comments he made in mid-March about inner-city: “men not working and just generations of men not even thinking about working or learning the value and the culture of work.”

The token Republican on the panel, former U.S. Rep. Rick Lazio, made some excellent points about Democrat incompetence at efficient governing, but they went unanswered, as usual.

But the money moment came when Maher quoted “Ryan”: “Too many of our young people just can’t be bothered. They’re sitting on couches for hours playing video games, watching TV, instead of dreaming of being a teacher or a lawyer or a business leader, they’re fantasizing about being a baller or a rapper.”

When he revealed that it was Michelle Obama who said it rather than Ryan, he was greeted with a “hushed silence.”

“Is something less true if a white person says it about black people?”:  Maher asked.

“A truth is a truth and a lie is a lie,” he said, before asking about the context of the first lady’s speech. Told it was a commencement address at Bowie State University, the historically black college in Maryland, he visibly relaxed.

“She’s talking to black people,” he explained. “We talk to each other differently than we talk to you.”

A truth is a truth and a lie is a lie; we talk to each other differently than we talk to you; and we have always been at war with Eastasia.

Check out the video here.