Well, this just figures. Obama had the stones to literally thank himself in a speech last week as he took credit for the economic growth that President Trump has ignited. At a Chicago climate summit, he spoke to a rapturous crowd and told them that despite “resistance at every step of the way,” his administration’s efforts to fight climate change resulted in a better economy. Uh, excuse me? Climate change has had NOTHING to do with this economy. If anything, it has cost us millions that we could ill afford. Obama is a delusional Marxist.

“As we took these actions, we saw the U.S. economy grow consistently,” Obama said. “We saw the longest streak of job creation in American history by far — a streak that still continues, by the way.” He then had the nerve to add: “Thanks Obama.” Excuse me while I vomit… A LOT. What a freaking liar. I know a lot of people who were unemployed the whole time Obama was in office. He had us in a quasi-depression. There were no jobs. Under President Trump that has finally started turning around. 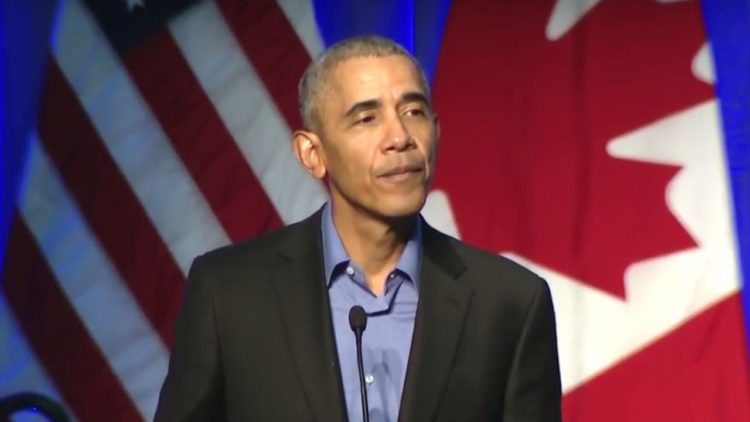 I’m surprised Obama wasn’t struck by lightning while saying this. Remember how he shut down coal plants? He stopped oil production and he shuttered manufacturing. He literally chased businesses out of the country with burdensome taxation and regulations. And he has the nerve to try and take credit for what Trump has done. Talk about arrogant. His subjects loudly cheered and applauded him. Then they laughed. Clueless useful idiots. Then to top it off, this vain asshat winked at his audience as if he was sharing a secret joke.

Since Trump has been in office, the stock market has skyrocketed 30 percent. We are on course for a third quarter with over 3 percent growth. The jobless rate has dropped to a 17-year low of 4.1 percent. Why? Because Trump has nixed a ton of regulations and he’s about to slash taxes. Neither of which Obama would ever do. Business leaders and economists both give all the credit for this to President Trump. U.S. Rep. Peter Roskam (R-IL) said earlier this year that Obama’s administration was the first to never have a “whole year of 3 percent growth.” Small wonder… Marxism will do that to an economy.

Obama all but destroyed this country with his communist policies. For him to try and take credit for what Trump has done is obscene and predictable. The only thing Obama was good at was spending money, partying and crushing the spirit of America.