Republican Congressman Jason Chaffetz: Obama May Be Impeached Over Benghazi

The “I-word” isn’t just being tossed around in Internet forums these days. Now, it’s actually heard in the halls of Congress. Republican Jason Chaffetz is saying that Obama may be impeached[1]. 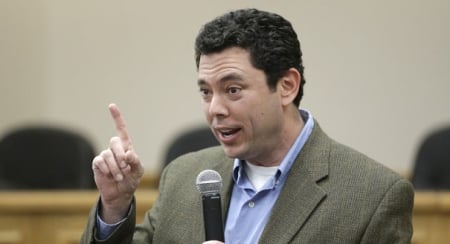 “They purposefully and willfully misled the American people, and that’s unacceptable,” Chaffetz tells me. “It’s part of a pattern of deception.”

Behind the scenes, he says, House Republicans are frustrated by the White House’s evasiveness, and the calls for impeachment will likely increase.

…Chaffetz acknowledges that House speaker John Boehner is wary of moving too swiftly against the president, but the brash, 46-year-old conservative is tired of waiting for answers. He’s ready to issue subpoenas and schedule more hearings.

His chief concern is that the White House, which he says is staffed by “self-preservationists,” seems to be hiding documents related to the attack and the president’s decisions, in order to protect the administration from scrutiny.

“They’ve released 100 emails, but there are thousands of documents that we still need to see,” he says. “The truth gets colder as time goes on, so we need to stay vigilant.”

…Chaffetz’s tension with the White House has been building for months, ever since he took a fact-finding trip to Libya last October, less than a month after the terrorist attack.

…“The State Department had people watching my every move,” he recalls. “But even as they watched me like a hawk, I was able to see how ill-prepared the embassy was for an attack. There were walls that weren’t very tall, and trees that could be climbed. One of the walls was so low that some people were able to prop up a ladder to dump trash on our embassy’s grounds. I asked one of my guides why that was allowed, and he shook his head and said, ‘Well, I guess we just didn’t want to offend the neighbors.’”

But the worst part of the journey, Chaffetz says, was having State Department lawyer Jeremy Freeman along, shadowing him through every meeting. Hicks and other U.S. diplomats, he says, were effectively muzzled by his presence. “And at one point, Hicks had to leave a meeting, only to be chastised over the phone by Cheryl Mills, Hillary Clinton’s top adviser,” he says. “It was unsettling – to see, up close, the depths to which Secretary Clinton was willing to go to manipulate the process.”

…Chaffetz doesn’t buy it. “This is an administration embroiled in a scandal that they created,” he says. “It’s a cover-up. I’m not saying impeachment is the end game, but it’s a possibility, especially if they keep doing little to help us learn more.”

In a just world, Barack Obama could conceivably be impeached for the crooked way he helped unions in the GM/Chrysler bailouts, for Solyndra, for Fast and Furious, for Benghazi or for listening in on phone calls between congressmen and reporters. However, we live in a world where integrity is dead in the Democrat Party, the mainstream media flacks for Obama behave like he owns them and Republicans feel like they lost politically the last time they justifiably impeached Bill Clinton.

So, does Barack Obama deserve to be impeached? Probably. Will there be a serious attempt to impeach him? That seems much more likely than it did a couple of months ago, but the odds are still against it. Could we see Barack Obama driven from office? That’s highly unlikely, although these scandals are likely to damage him quite a bit by the time it’s all said and done.