Despite recognition by virtually everyone but the Oval Office that the White House trumpeted anti-Islamist video trailer has next to nothing to do with violence in the Middle East, and that it is simply a re-election distraction ploy that deflects blame from Obama’s failed fo 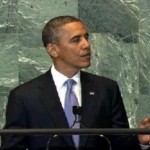 [1]reign policy; in his speech to the United Nations General Assembly Barack Obama continued to blame the video for Mid-East riots and violent demonstrations.

Obama used that narrative as the backdrop for saying there is “No speech that justifies mindless violence.:  There are no words that excuse the killing of innocents” and “No video that justifies an attack on an embassy”.:  Obama also said that the video “is an insult not only to Muslims, but to America as well.”

How is the exercise of free speech by an American an insult to America?:  Is Obama ever going to make a similar statement about artists who dip Crucifixes in urine?

Obama also said “I know that not all countries in this body share this particular understanding of the protection of free speech. We recognize that.”

So Obama recognizes that UN member states do not share American views on the protection of free speech by the U.S. Constitution.

What is Obama doing about it?:  Recognizing that Islamists will continue to launch military assaults upon American embassies and consulates around the world while he continues to lay the blame at the feet of Americans exercising their right to free speech?

GOP presidential nominee Mitt Romney, giving an address before the Clinton Global Initiative’s annual conference, made the case for th 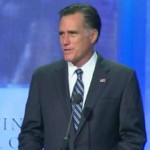 [3]e inherent strength and endurance of the private sector and the dignity derived by individuals reaping the rewards of their own labor.

“That must be at the heart of our effort to help people build economies that can create jobs for people, young and old alike. Work builds self-esteem. It transforms minds from fantasy and fanaticism to reality and grounding.:  Work will not long tolerate corruption nor quietly endure the brazen theft by government of the product of hardworking men and women.”

Romney said if he wins the White House, he will “remind the world of the goodness and bigness of the American heart. : I will never apologize for America. I believe that America has been one of the greatest forces for good the world has ever known.:  We can hold that knowledge in our hearts with humility and unwavering conviction.”

Obama’s view is to preach moral equivalence while shrinking from defense of the U.S. Constitution and the God given rights it protects for all Americans.

Romney’s is to stand up for America and its economic system while celebrating the prosperity and good America has both created and symbolized for over two centuries.

Does the distinction need to be drawn more clearly?