RUSSIA to OBAMA: Prove the hack, or shut your yap! [VIDEO]

Whereas, I do believe that the Russians hacked the DNC[1], they did not hack our voting process. I don’t trust WikiLeaks as they are nothing but a propaganda outlet for the Russians. Yes, we should investigate the Russians and then decide what steps should be taken. Obama just came out[2] and threatened Russia, saying they interfered with the election (which they did not, they exposed some things the Democrats didn’t want exposed)… that is moronic. Why would he do that? Because he wants to leave another mess for President-elect Trump to have to clean up once he leaves. I sincerely doubt that Putin will fall for this or that Obama will do much to retaliate.

The Russians have come out and flatly stated that the US needs to either prove the hacking claims or shut up. I hate to side with the Russians here, but I agree. When the House Intelligence Committee asked for proof from the CIA and other Intelligence agencies, they couldn’t produce it. So, it is highly unlikely we have such proof. Obama’s blustering about retaliating at a time of our choosing is the stuff that war is made of and I think he knows that. He wants to create more chaos and upheaval. 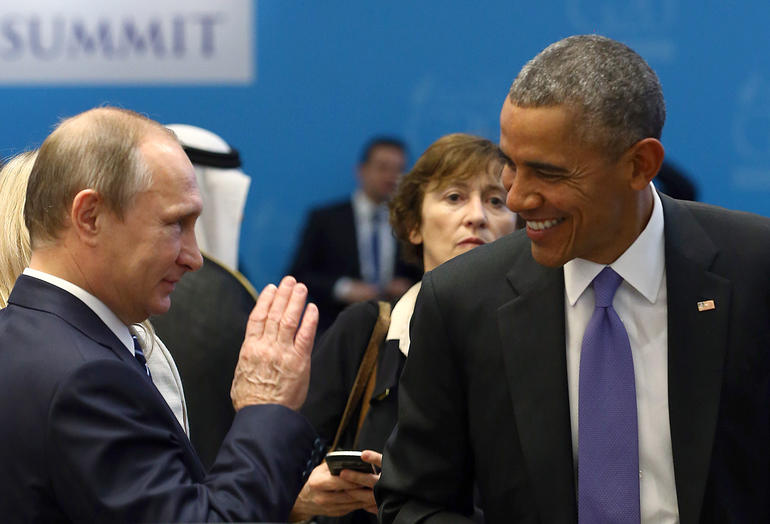 As the Obama administration stepped up its rhetoric against Russia for allegedly hacking its way into American politics, Russian officials demanded[4] President Barack Obama either “stop talking” or “produce some proof.”

Obama said Thursday that the United States will retaliate against Russia for interfering in the election by hacking political organizations.

“I think there’s no doubt that when any foreign government tries to impact on the integrity of our elections, that we need to take action[5] and we will, at a time and a place of our own choosing,” he said.

“Some of it may be explicit and publicized. Some of it may not be. Mr. Putin is well aware of my feelings about this, because I spoke to him directly about it,” the president added.

The CIA has said that Russian government hackers attacked the Democratic National Committee and Clinton campaign chair John Podesta, but WikiLeaks founder Julian Assange, who published leaked emails from both of those sources, denied Russia had a role in obtaining the documents WikiLeaks published.

I noticed in the video that Obama also addressed propaganda on the Internet… that is a sly reference to what the left is calling ‘fake news’ on the right and a signal that they are going to censor us. Obama also spoke of international oversight… that would be the UN. Man… he can’t leave soon enough, but when Obama goes, he will try and rule over the political scene from outside the White House. He’s not done yet.

Obama has gone so far as to accuse Trump of being directly involved in the hack. I don’t believe that Trump has anything to do with this. President-elect Trump has publicly voiced doubts about the role of Russian hackers in the elections. “I think it’s ridiculous. I think it’s just another excuse,” Trump told host Chris Wallace on Fox News Sunday. On Friday, Dmitry Peskov, a spokesman for Russian President Vladimir Putin, said the Obama administration has yet to back up its accusations with any evidence. “They should either stop talking about that or produce some proof at last. Otherwise it all begins to look unseemly,” said Peskov, who added it was “indecent” to “groundlessly” accuse Russia of trying to interfere in the elections. Don’t be fooled… the Russians are not innocent here, but they aren’t what the left is claiming they are either.

I find it very convenient that Obama and the left didn’t bring this up until after Hillary lost. Suddenly, it’s a big deal… well, why wasn’t it when they first learned that the Russians were messing around with the DNC? And frankly, the Russians send out propaganda and interfere in every major election we have. The only reason they care now is that Clinton lost and they want a scapegoat to delegitimize Trump’s Presidency. I’m no fan of Peter King from NY, but he gets this right: “Right now, certain elements of the media, certain elements of the intelligence community and certain politicians are really doing the work of the Russians — they’re creating this uncertainty over the election.” The electors vote Monday to finalize the election of Donald Trump. Obama needs to put up, or shut up. 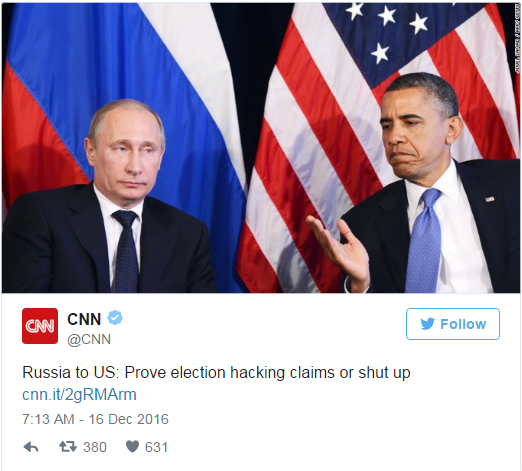