I agree that we should be very alarmed[1] by the actions of Russia, but I find the timing of this ridiculously convenient. Russia has been spying on us for decades and Mitt Romney rightly pointed out that they are our biggest enemy. But until the last few weeks of the Obama administration, the left loved them. Now, they are throwing shade on the Russians, accusing them of being the cause for Hillary Clinton losing the election. Nothing could be further from the truth. The Russians took advantage of a security gap left open by the DNC. Our agencies would have taken the same advantage of the Russians given the chance. All the Russians did was expose the dirty laundry of the left. It didn’t affect the election at all and they certainly didn’t hack the vote.

Russian Prime Minister Dmitry Medvedev tweeted “RIP” to the Obama administration. I think we can all share in that sentiment. Or perhaps, “RIH,” for rot in hell. Obama is trying to make it as difficult as possible for President-elect Donald Trump as he comes into office. The dealings with Russia should have been left to the next administration for better or worse. I personally want to see how Trump deals with the Russians. He may take an entirely different route involving negotiating. I don’t trust the Russians at all, but you have to strategize your moves with them, not act out of petty vindictiveness. 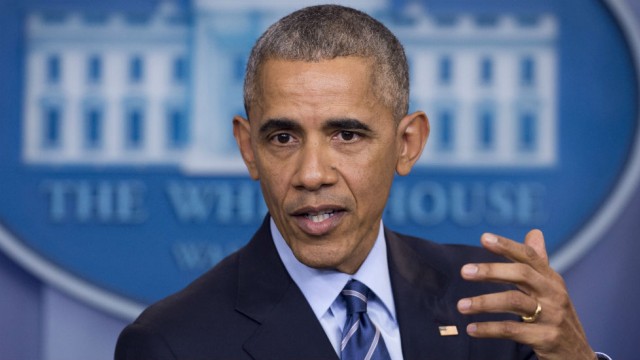 On Friday, Russian Prime Minister Dmitry Medvedev tweeted “RIP,” or Rest in Peace, in reference to U.S. and Russian relations[3] as President Obama’s term comes to an end.

“It is regrettable that the Obama administration, which started out by restoring our ties, is ending its term in an anti-Russia agony,” he tweeted[4]. “RIP.”

Medvedev served as Russian president until 2012, electing to step aside for current President Vladimir Putin.

On Thursday, the White House announced[5] a series of sanctions it would be issuing against Russia, stemming from November election hacking allegations. A total of 35 Russian officials will be expelled from the U.S., and declassified technical information on Russian civilian and military intelligence service cyber activity will be released by the government.

In addition, the White House[6] said that two U.S.-based Russian compounds are going to be shut down, and more measures may be taken. However, not all sanctions will not be publicized.

“All Americans should be alarmed by Russia’s actions,” President Obama said in a statement. “These data theft and disclosure activities could only have been directed by the highest levels of the Russian government.”

Putin is literally making a fool of Obama.[7] “We won’t create problems for American diplomats,” Putin said in a statement released by his press service Friday afternoon, adding that Russia retained the right to punish U.S. diplomats in the future. He said he would “plan further steps for restoring the Russian-American relationship based on the policies enacted by the administration of President Donald Trump.” He even said that this would be a good vacation for Russian diplomats and invited the families of American diplomats to ring in the New Year with the Kremlin. In a terse response, the State Department said Friday: “We have seen President Putin’s remarks. We have nothing further to add.”

This is exactly what I expected of Putin. That he would take the high road and wait for Trump to take office. I don’t know why people can’t see that this whole ‘blame the Russians for the election’ thing, looks exceedingly childish to every intelligence agency out there, despite a wag-the-finger letter from DHS. The Russians are being used as scapegoats big time by the left. Yes, we need to deal with the Russians, but not now. A new Commander-in-Chief will have that task. Obama is doing this to hurt Trump and the US. It’s the equivalent of a demagogue throwing a tantrum as he’s dragged kicking and screaming from the throne. 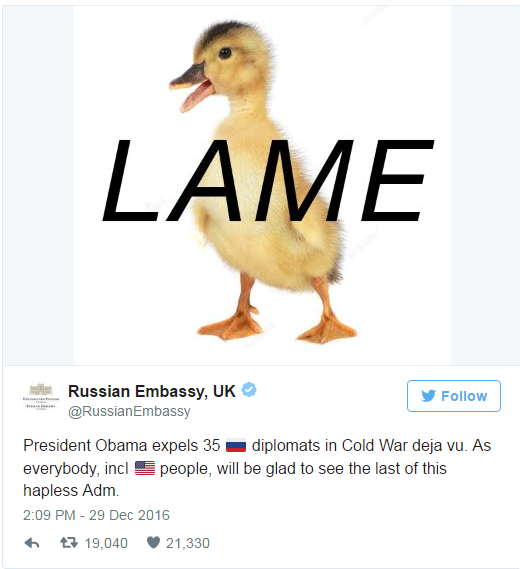