Full disclosure on the birth certificate issue…[1] I never gave credence to it and I still don’t. I believe it is a non-issue, especially now that Obama is leaving office. There is much more this man is guilty of and should answer for. Having said that, I respect those who doubt the validity of the document and their views. Joe Arpaio started going after Obama on his birth certificate five years ago and has not let up since then. Despite being ridiculed and maligned, he kept digging. Now he says that there are nine points of forgery on the document and two separate experts are in agreement on it.

On the other side, officials in Hawaii have confirmed the birth certificate is real and valid. Of course, given the mistrust of the government many feel, that doesn’t carry much weight these days. President-elect Donald Trump also called the birth certificate into question at one time, but has since backed off it because there are just too many other important issues to address after eight long years of Obama’s destructive policies. Time to move on and start fixing what is broken. Trump also now contends that Obama is a US citizen and his birth certificate is legitimate. 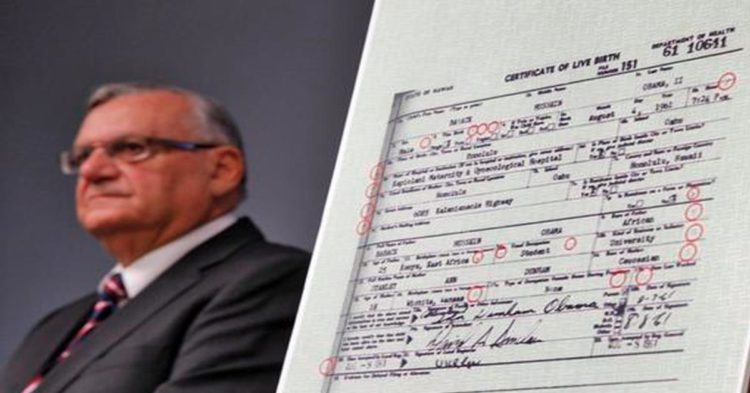 In a blockbuster news conference Thursday in Phoenix, Sheriff Arpaio revealed that five years ago, he launched an investigation into the president’s birth certificate.

Nearly half a decade later, his lead investigator, Mike Zullo, has determined that the certificate allegedly contains “9 points of forgery” and was created by copying and pasting information from the legitimate birth certificate of a woman born in Hawaii.

Speaking to reporters Thursday alongside Arpaio, Zullo “stressed that the theory was supported by two experts on two separate continents,” according to USA Today[3].

“We and anyone else who dared to question the document have been maligned, falsely labeled and grossly criticized,” Arpaio noted during the presser, his point being that the media should have never doubted his concerns about Obama’s birth certificate.

Many, many Americans still believe that Obama was not born on American soil and was not a legitimate president. He certainly was an enemy within regardless of where he was born. There are a number of credible voices out there that still claim the birth certificate is a forgery… such as Jerome Corsi, Ph.D. of WND who has reportedly praised Arpaio for having “done the United States a heroic service demonstrating by forensic analysis that the long form birth certificate produced in a White House news conference on April 27, 2011, as Barack Obama’s authentic birth certificate is a forgery.”

As I said before, I believe all of this is a moot point now. For reasons that are beyond me, Barack Obama was elected twice and allowed to stay in office no matter what he did or said. The birth certificate/citizenship debate will continue and Obama will be looked at for decades to come. Not because of where he was or wasn’t born… but because he almost single handedly brought down the greatest nation on earth.