Well, there’s at least one conservative[1] in Oregon and he’s not shy. Kevin Kerwin owns Kevin the Geek Computer Repair and lives in Lake Oswego. He’s had it with liberals and I guess he’s been done with them for some time, but the Chicago torturing of a disabled white boy was the final straw for Kevin. He put up an epic sign in his store window telling liberals basically to go to hell. I can’t say I blame him one little bit.

Kevin also mocked CNN as the “Comedy News Network, Fake News all the Time, and Propaganda for Liberals.” Again, pretty much spot on. He got tired of media outlets like CNN trying to sanitize the news and adjust little facts like race and terrorist affiliations with ISIS. 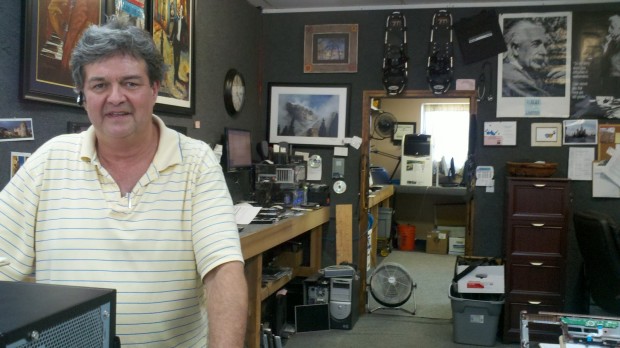 A small-business owner in Oregon has a message for whiny liberals and “fake news” outlets like CNN: “Go to hell.”

Kevin Kerwin, the owner of Kevin the Geek Computer Repair store in Lake Oswego, is one of the few conservatives in the radically leftist state of Oregon.

Kerwin is disgusted by the recent spate of hate crimes against Donald Trump supporters and the liberal media’s attempts to cover them up. Kerwin was also furious after leftists rioted and tried to burn down neighboring Portland right after Trump was elected.

But the “final straw” came when a mentally disabled teen was brutally tortured by four thugs simply for being white. They also accused the victim of being a Trump supporter, but there’s no evidence he is (given his youth and mental capacity, it’s unlikely he voted).

“When that kidnapping happened, that was one of the last straws,” Kerwin told Fox News[3]. That’s when he posted an epic sign in front of his store telling “ignorant liberals” to grow the hell up.

As for fear of being boycotted, Kevin doesn’t give a crap. Finally, someone with a spine. He won’t be bullied or intimidated over his political views and he will not be silenced. He’s a Trump supporter and proud to be a conservative. A very brave stance in the blue wilds of Oregon.

“They’ve all boycotted my store, but I don’t care what they think,” Kerwin said. “I’ve got a lot of great conservatives here and they support my shop.” I bet he does and I’m going to recommend him to my daughter and son-in-law in Oregon. They are conservatives too. “Oregon is a very beautiful state, but it’s infested with liberals,” Kevin said[4]. Yep, it sure is.

In case his sign is not easy to read for you liberals out here, I’ll leave you with his advice for you:

“To all the ignorant liberals including Bruce Springsteen…The 4 people who kidnapped & tortured a disabled teenager just because he supports Donald Trump – Just shows everyone you are a party of complete morons. I’m embarrassed to call you Americans. Go straight to Hell where you belong. We’ve had it with you idiots.”

Kevin has even been slapped[5] by liberals over his views and you can see a love note left for him below. 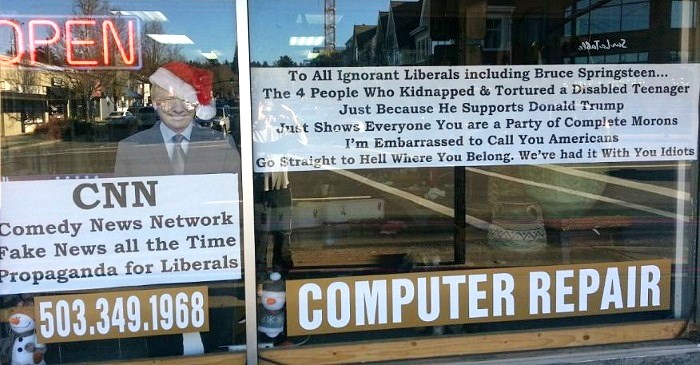 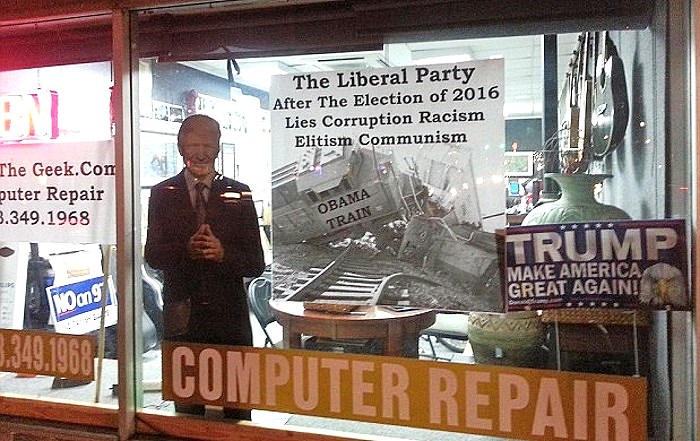 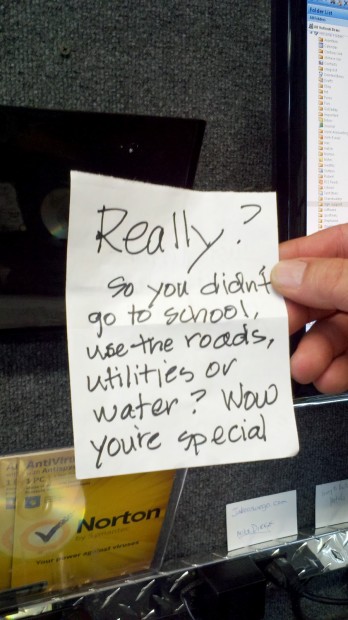