Spike in Deaths in Afghanistan Linked to Obama Rules of Engagement

Fact: 73 percent of all deaths in Afghanistan[1] have occurred on Obama’s watch.

In total, 2,144 U.S. military personnel have given their lives fighting in and around Afghanistan as part of Operation Enduring Freedom.

1,575 of the U.S. military personnel who have sacrificed their lives in this cause were killed during the presidency of Barack Obama.

That means 73 percent of the casualties in the Afghan War have happened on Barack Obama’s watch.

Under President George W. Bush, from 2001 until Jan. 20, 2009, 569 U.S. military personnel were killed in and around Afghanistan fighting in Operation Enduring Freedom.

How is this possible?

Obama changed the rules of engagement[2]: 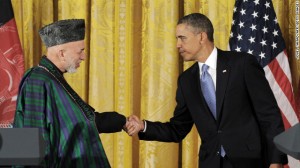 “In: Afghanistan[4], the [rules of engagement] that were put in place in 2009 and 2010 have created hesitation and confusion for our war fighters,” said: Wayne Simmons[5], a retired: U.S. intelligence[6]: officer who worked in: NATO headquarters[7]: in Kabul as the rules took effect, first under Army Gen. Stanley M. McChrystal, then Army: Gen. David H. Petraeus[8].

“It is no accident nor a coincidence that from January 2009 to August of 2010, coinciding with the Obama/McChrystal radical change of the [rules of engagement], casualties more than doubled,”: Mr. Simmons[9]: said. “The carnage will certainly continue as the already fragile and ineffective [rules] have been further weakened by the: Obama administration[10]: as if they were playground rules.”

As President Obama’s troop surge began in 2009, so did new rules of engagement demanded by Afghan President: Hamid Karzai[11], who was responding to local elders angry over the deaths of civilians from: NATO[12]: airstrikes and ground operations.

Sickening to know our rules of engagement are dictated by Hamid Karzai.

Anyone else ready to bring them all home?