Student Loan Money is Being Siphoned Off Into Obamacare

Conservatives tried to tell young Americans that a twenty year old voting for Barack Obama was like a field mouse voting to live in a cage with a cat, but they didn’t listen. Not only is he wracking up crushing levels of debt that they’re going to have to pay off, but young Americans are paying more for their college loans so that they can have the privilege of seeing the best health care system in the world destroyed by Obamacare before most of them will need it most[1]. 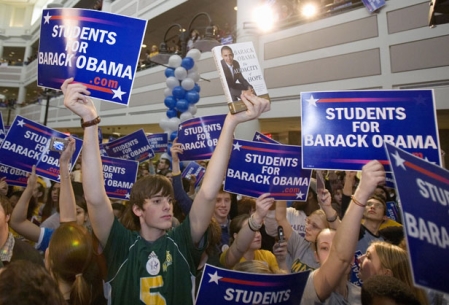 It’s sad to say, but a lot of college Americans brought this on themselves.

College students struggling to pay off their student loans would see their interest rates plunge from 6.8 percent to 5.3 percent if not for President Obama’s signature healthcare law – Obamacare and other federal programs, according to veteran political analyst and best-selling author Dick Morris.

…Citing Congressional Budget Office figures, Morris said that some $8.7 billion in profits from student loans are being diverted to pay for Obamacare while another $10.3 billion in profits are put toward the federal debt, and $36 billion go to Pell Scholarship grants.

…Crediting Tennessee Sen. Lamar Alexander, Morris said that the federal government borrows funds for the student loan program at 2.8 percent and then lends the funds to students at 6.8 percent.

“Undoubtedly, few students know of this rip-off. If they did, they would curse Obama with each stroke of the pen they use to pay off the staggering obligations of student debt,” said Morris. “The entire policy of student loans assures a kind of indentured servitude for our college graduates, and to piggy back on this burden the costs of Obamacare is quite extraordinary.”

Morris urged fellow Republicans to jump on the issue.

“How can President Obama and the Democrats hope to win the votes of those students burdened with loans when they are, in effect, directly taxing them to pay for Obamacare? The president has strayed so far from his campaign commitment not to raise taxes on the middle class that it is laughable to recall these days his promise then,” Morris explained. “But to tax students struggling to pay loans an extra 4 percent interest and then to divert a good portion of that money to pay for his healthcare reform is beyond belief.”

When Obamacare was passed, student loans were taken over at the same time and predictably, the program has been horribly mismanaged. Student loan delinquencies have exploded. Additionally, don’t forget that Obama already looted money from Medicare to make Obamacare’s numbers look better, but that wasn’t enough; so he’s pilfering money from the student loans, too. Everything this guy touches, he ruins. If his whole goal were to do nothing but damage the country as much as possible without going to jail for treason, he couldn’t do much more than he has so far and the amazing thing is so many people are voting to have their futures ruined. Sure, conservatives can say, “We told you so,” but that’s poor compensation for seeing the greatest nation on earth being systematically spoiled by an incompetent imbecile.