Barack Obama’s brilliant plan to let Central Americans know that they need to send their unaccompanied children across the border, since minors won’t be deported anymore, isn’t going too well. In addition to the millions of illegal immigrant children pouring across the border on what are being called “death trains”, these children are also becoming victims of vicious “coyote” gangs, who are subjecting them to unbelievable horrors. 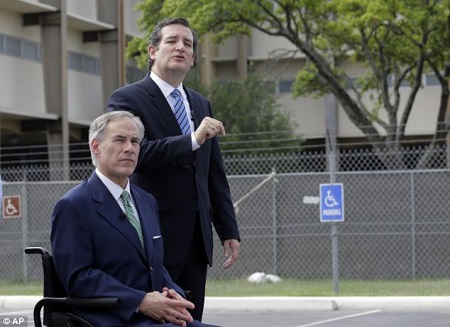 Human traffickers are forcing illegal immigrant children to cut off the ears and fingers of other kids traveling into the U.S. in order to extort money from their families, a Texas senator claimed on Monday.

Lashing out at President Barack Obama for a 2012 policy shift that he said encourages Central American parents to send their children northward, Sen. Ted Cruz said the children are being placed in ‘unspeakable’ peril when the traffickers,known as ‘coyotes,’ take over.

‘We just heard stories of little boys and little girls, forced by these drug dealers to cut off the fingers or cut off the ears of other little boys and little girls, in order to extort money from their families,’ Cruz said after he toured the temporary holding facility for ‘unaccompanied alien children’ at Lackland Air Force Base along with Texas Attorney General Greg Abbott and Rep. Michael Burgess.

‘And these children are told, “If you don’t cut off the fingers or ears of another child, you’ll be shot”.’

Cruz was relating accounts he heard from officials at the Lackland facility in San Antonio, according to a spokesperson in his office.

… The coyotes, Cruz said, ‘are not well-meaning social workers trying to care for these kids. These are hardened, cold criminals. These are transnational, global criminal cartels. And they are vicious, violent murderers.’

‘These children are being subjected to physical abuse, to sexual abuse. Some of them are losing their lives.’

Sen. Cruz is right — Obama bears the burden of responsibility for this. These families are desperate for their children to escape the violence and hardships of their own countries, and so are jumping at the chance to circumvent the legal immigration system, which sadly, only puts these children into the hands of the most brutal criminals. It’s not just horrific — it was preventable.