Obama is a big fan of pushing his agenda onto the public without bothering to get the approval of Congress first. But he may not be able to do that this time, thanks to Ted Cruz, who is < a href=http://freebeacon.com/national-security/cruz-threatens-to-cut-off-state-dept-funding-after-nuke-deal/>threatening to block State Department funding if Congress isn’t given the chance to investigate the Iran deal. 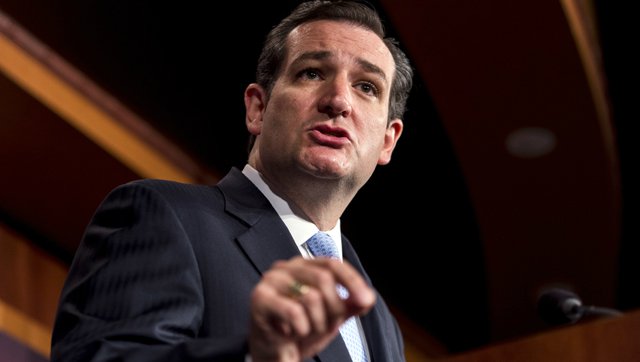 Sen. Ted Cruz (R., Texas) is moving to block future State Department funding and nominees unless President Barack Obama guarantees that Congress will have the authority to fully review a recently inked nuclear accord with Iran before the deal is approved by the United Nations, according to a copy of a letter obtained by the Washington Free Beacon.

Cruz, a vocal opponent of the administration’s diplomacy with Iran, maintains that the White House is seeking to circumvent congressional review of the deal by going straight to the U.N.

Such a move could lift key sanctions on Iran before Congress has had the chance to fully review and vote on the deal.

Cruz says the United States should not be backing any U.N. action until Congress fulfills its legal role in reviewing—and potentially rejecting—the deal, which will provide Iran with billions of dollars in economic relief.

Under the parameters of the deal, the United States and other global powers have agreed to rollback U.N. restrictions on Iran’s importation of weapons and previous obligations to fully halt uranium enrichment work, heavy water work relevant to the development of a plutonium-based weapon, and the construction of ballistic missiles.

Cruz says none of these restrictions should be lifted before Congress has fully reviewed and voted on the deal. Legislators have legally been given 60 days to do this.

However, the nuclear deal inked in Vienna this week makes no mention of the law giving Congress the power to review the deal. Instead, it assumes that Congress has already signed off.

Cruz is threatening to block new funding for the State Department and withhold all of its nominees from approval until Obama guarantees that no U.N. action will be taken before Congress performs its oversight role.

… “It seems your Administration intended all along to circumvent this domestic review by moving the agreement to the UN Security Council before the mandatory 60-day review period ends, thus adopting an agreement without Congressional consent,” Cruz writes. “That Samantha Power has already introduced a draft resolution to the Security Council portrays an offensive level of disrespect for the American people and their elected representatives in Congress.”

Cruz demands that the White House act quickly to validate Congress’ role in approving or rejecting the deal.

“Under no circumstances should the Executive Branch take such action before the Congressional review process is complete,” he writes. “Thus, I ask that you provide written assurances that you will take all necessary steps to block any UN Security Council resolution approving the JCPOA until the statutory timeline for Congressional review has run its course.”

What a surprise — Obama and his administration coordinated a nuclear deal with the United Nations and Iran under false pretenses. It’s also beyond disturbing that a sitting president would intentionally maneuver to work around the separation of powers, as required by the Constitution, so that he could arm a terrorist nation without the approval of Congress first.