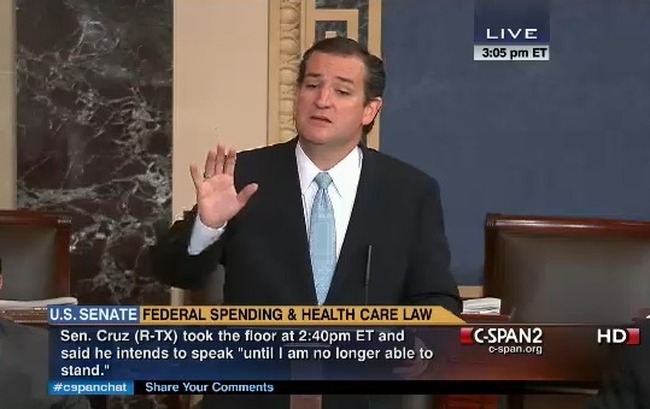 Go, Ted, go…[2] Imagine my pride and love for this man as I got up this morning to find him still speaking — still railing against Obamacare and the Progressives on the Left. On Tammy Bruce[3], I heard him read “Green Eggs and Ham[4]” from Dr. Seuss to his daughters on the air because he was missing their bedtime.

On Tuesday night, as Senator Ted Cruz (R – TX) continued his quasi-filibuster regarding Obamacare, he began reading the Dr. Seuss classic “Green Eggs and Ham” after reading Bible verses for his two daughters on the floor of the Senate. He said he wanted to read them to bed from the floor of the Senate. He compared the main character’s refusal to eat green eggs and ham to the American public’s refusal of Obamacare. 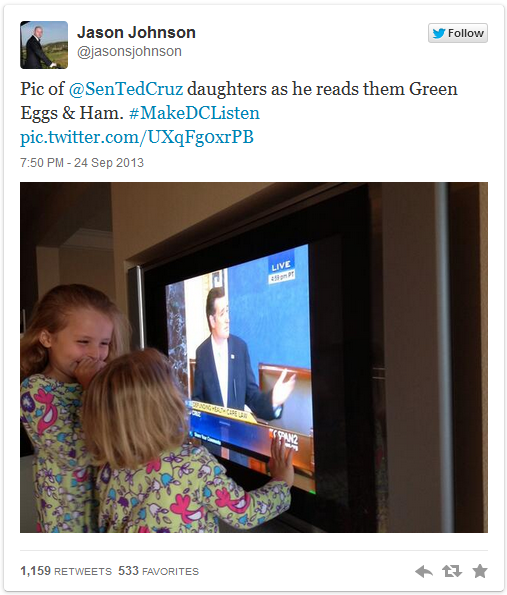 Cruz eviscerated Obamacare[5] over and over and over… Then he turned his gaze on the Progressive Republicans[6]. We will remember each and every one of you who turned on us.

“If ye love wealth better than liberty,
the tranquility of servitude
better than the animating contest of freedom,
go home from us in peace.
We ask not your counsels or your arms.
Crouch down and lick the hands which feed you.
May your chains set lightly upon you,
and may posterity forget that you were our countrymen.” — Samuel Adams

In his remarks, he repeatedly took aim at fellow Republicans, urging them to join him in voting against limiting debate on a stopgap spending bill that also defunds Obamacare. Many Republicans said they will vote along with Democrats to proceed with the stopgap bill because as of now it contains the defunding provisions.

Mr. Cruz, though, said it is certain Democrats will be able to strip the defunding provision with a majority vote later in the process, so the only chance to exert influence is early on, when it will take a 60-vote threshold to even proceed with action.

Don’t be fooled… This IS a life and death struggle[8]. The American people know it and what’s more… our leaders know it and don’t give a crap about the American people. Only their power, only their pockets, only their well-being. Ladies and gentlemen… this is not the death of the Tea Party, this is the birth of a revolution. 68% say this is wrong[9] and the rest are ill-informed.

Rates for the young[10] will be high. Men’s rates will jump by 99%[11], women’s by 62% and it may be much worse than that. Then the new taxes kick in. You think we are in a depression now? Wait till Obamacare takes hold. You ain’t seen nothing yet.

As Ted Cruz goes to Washington and takes a principled stand, America and life as we have always known it, hangs in the balance. Ted Cruz could be our next president in a political earthquake, the likes we have not seen since the ’80s and maybe never. The Left should be very careful what they wish for — they just might get that revolution they so ardently want.